Always, Patsy Cline at the Walnut Street Theatre’s Independence Studio is a show that is sure to please audiences. The two person cast of this show will delight audiences with their energy and passion, and they are dynamic as they tell the story about the friendship between Patsy Cline and Louise Seger. I had the pleasure to speak with Denise Whelan who plays Louise in the show. I spoke with her about playing Louise, what the audience can expect from the show as well as why this particular story appeals to audiences.

Kelli Curtin: Could you tell me about the show, Always, Patsy Cline?

Denise Whelan: It is about a super-fan, Louise Seger, who has a chance encounter with Patsy Cline and they develop a friendship. After they meet, they communicate through letters and phone calls. In the show Louise tells about the night she met Patsy Cline and the subsequent day that she spent with her. A large portion of the show revolves around those two days, the night they met at the Esquire Ballroom in Houston, Texas, and the day after when Louise takes Patsy to the airport. The show describes how Patsy and Louise developed a friendship through subsequent correspondence. I do not want to give too much away because I want people to come out and experience this fabulous show for themselves, but that is the basic plot in a nutshell.

Kelli: What can audiences expect from the show?

Denise: People will hear wonderful Patsy Cline songs performed beautifully by Jenny Lee Stern. The show is just fun from start to finish. Louise has such a large personality that she truly engages the audience. In the way she tells her story she draws the audience in, and lets them relive her interactions with Patsy Cline along with her. Audiences will have a great time watching Always, Patsy Cline, with Louise’s boisterous personality, and the beautiful Patsy Cline songs, people will have a fun evening.

Kelli: Could you tell me about your character, Louise Seger?

Denise: She is cut from the same cloth as Patsy Cline, she is a down to earth country girl. She has been married and divorced, she has two 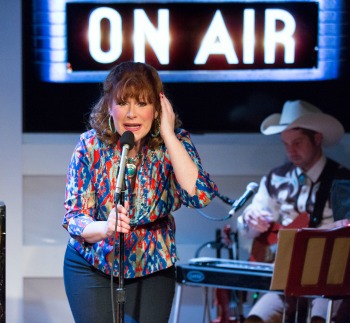 children and she is a working mother. Louise just adores Patsy Cline’s voice, and she fell in love with her voice. She heard her on the radio one day and as she says in the play, Cline’s music, “stopped me in my tracks.”

I love playing this role, and I really enjoy Louise and find her easy to play. I think this is because I do not really see myself in her. The only time I can really relate to her is when she is telling about Cline’s plane crash. Anyone who loves someone can immediately empathize with this part of the show, and I find the emotion tied to this part of the play very relatable.

Kelli: How do you prepare for a role when it is based on a real person and not a character?

Denise:  There is not a lot of information about Louise Seger out there, so I did not have the opportunity to do intensive research. This play is not so much about Louise or Patsy Cline, it is about a relationship between two friends, and the joy involved in this friendship. The book for this show is about 50 pages of my character talking because I am there to guide the audience through this friendship, and I take them on a journey into the lives of these two women and how they met and developed a friendship. So, besides memorizing the script, the fun part for me is adding the layers to this character. Coming into this role, I did not know a whole lot about Patsy Cline or her music except a few of her well-known songs. What I did learn through this process is one of Cline’s inspirations was Elvis Presley, so she was more of a country-rock figure. When I had the chance to add layers to this character I found what this show boils down to is that it is about two friends who have a lot of parallels to each other.

Kelli: Do you think the kind of fan/celebrity relationship that Louise and Patsy had is still possible in today’s culture? 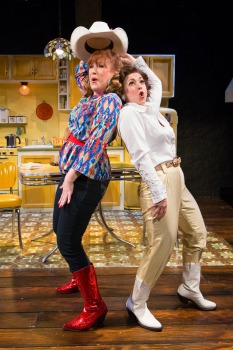 Denise: I think there are many people who have relationships with celebrities, it is just in a different way. Especially in this day and age when we are surrounded by pop culture, and there are fan clubs and the celebrity presence on social media. I just think it would be different, I doubt there is the occurrence that a fan in today’s society is personally inviting an icon over to have bacon and eggs at their house. I think most any celebrity today would be put off by something like that.

Kelli: Always, Patsy Cline is popular among audience members. What do you think is the appeal of the show?

Denise: First and foremost, if people are a fan of Patsy Cline then they come to hear the music. People come to hear basically a live version of her music. However, I also think that this show is a very sweet and endearing story, and it is a way that people unfamiliar with Cline are introduced to her and her music. The play is lots of fun, it is amusing and it is also touching. It is a combination of all these things that appeal to audiences.

Kelli: Do you have a favorite part of the show?

Denise: There are many parts of the show that I like for different reasons. However, there is a part of the show in which Louise explains what it was like when she finally met Patsy Cline. There is a monologue about Patsy and Louise sitting at a table in a bar with friends, and Patsy is asking Louise questions. She asks Louise about the band and some other things about the Esquire Ballroom. This scene really begins to show the connection between Patsy and Louise. It is one of my favorite parts of the production.

Kelli: What is the importance of live theatre in today’s culture?

Denise: To experience live theatre is to be in a place where you are fully immersed and you are a participant without knowing it. What I mean by 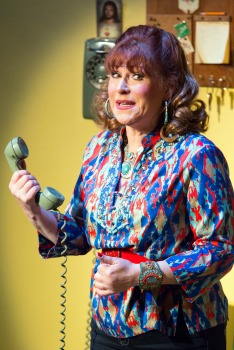 Denise Whelan can be seen in Always, Patsy Cline at Walnut Street Theatre’s Independence Studio through July 3, 2016. For more information and tickets visit their website at www.walnutstreettheatre.org or call the box office at 215-574-3550 or 800-982-2787.