Behind the Scenes: Denise Whelan Talks about THE RISE AND FALL OF LITTLE VOICE and the Importance of Live Theatre

The Rise and Fall of Little Voice opens at the Walnut Street Theatre on March 27, 2014 in the Independence Studio. This show is heartfelt, funny and full of emotion. The cast for this production is full of some of Philadelphia’s favorite actors such as Denise Whelan, Ellie Mooney, Anthony Lawton, Melissa Joy Hart, Jared McLenigan and David Bardeen.

Denise Whelan has been in numerous shows throughout the Philadelphia area. Recently, she was nominated for Best Supporting Actress for the Philadelphia Critic’s Award for her portrayal of Jean in Good People at the Walnut Street Theatre. Whelan has been seen on stages throughout the Philadelphia area, and has been in over twenty-five shows at the Walnut Street Theatre. I had the pleasure to speak to Whelan about playing the mother, Mari, in The Rise and Fall of Little Voice and about some of her favorite roles.

Kelli Curtin: Could you tell me about the show, The Rise and Fall of Little Voice?

Denise Whelan: I would consider this show a dramedy – it has moments of drama and there are times that this show will make people laugh. I play the mother, Mari Hoff. Mari’s husband died, and she lives with her daughter, Little Voice, who never speaks. Little Voice soothes herself though records. Mari is an alcoholic and brings men home all the time. One man, who is sleazy and schemes to make quick money, hears Little Voice sing. He thinks he can make money off her. Little Voice starts singing at a night club and she is a hot commodity.

The set for this show is wonderful; it has a top level to it. I cannot wait for audiences to see this show and the set in the Studio space.

Kelli Curtin: What can audiences expect?

Denise Whelan: The Rise and Fall of Little Voice is funny, tragic and ironic – this show is a rollercoaster of emotions. Audiences will not know where the show will end up. I feel the show moves quickly, and there are moments in the show where it is sentimental, entertaining and some skeevy moments. This show has the best actors in Philadelphia and I am very excited for people to see this show.

Kelli Curtin: Tell me about your character, Mari.

Denise Whelan: She is a young mom; she had her daughter when she was a teenager. When she married, she thought she met someone who 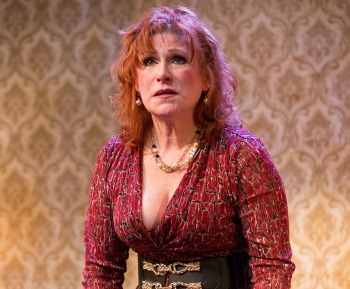 would take her out of the small town she lived in. Mari needed positive reinforcement and her husband did not give that to her, so she found this desired reinforcement through drinking. Mari is stuck in the past, and she is childlike. She says what is on her mind, and that can be hurtful. The relationship between her and her daughter is role reversal, Little Voice is the mother and Mari is the daughter. Mari really wants to be the center of attention and to be loved.

Kelli Curtin: Are there any aspects of Mari’s character that you can relate to?

Denise Whelan: All of us live in a protective world we construct for ourselves and this world is safe for us. When someone outside points out something in our reality that is not real, this truth is shattering. It is hard for us as human beings to wrap our heads around this truth and face it. In The Rise and Fall of Little Voice Ray Say tells Mari what he thinks of her. I can relate to this experience, there were times where I had to face the truth and had to come outside of my own protective plastic bubble.

Kelli Curtin: How did you prepare yourself for this role?

Kelli Curtin: Of all the roles that you have played, which have been the most rewarding? The most challenging?

Denise Whelan: The most rewarding roles that I have played are Norma Desmond from Sunset Boulevard, Mama Rose from Gypsy and Mrs. Lovett from Sweeney Todd. I also would add Jean from Good People. These are also the most challenging roles I have played.

Denise Whelan: As an actor there are moments when you allow yourself to be exposed on stage. It is a different thing for an actor to be vulnerable and exposed. This is not easy, but when it happens, the audience feels this rawness and it is that moment you know that you have the audience in the palm of your hands. They can feel your exposed emotions and they react to it, there is nothing like it.

Denise Whelan: First, see as many plays as you possibly can. You will learn from both the good and bad. The best lessons I learned were from watching an actor not play a part suitably, and gaining insight into how you could play the part differently. I also think people should take classes and be on the stage as much as possible in venues such as community theatres and church. The thing I would advise most is to not forget to have a life outside the theatre, this is what fuels acting. 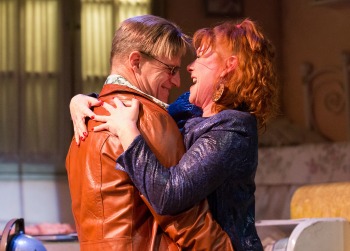 Kelli Curtin: Why do you think live theatre is important?

Denise Whelan: Without a doubt, live theatre is a participatory experience. People are engaged with others when they watch a live production, it is not like that when people sit and watch a movie. Sitting in a theatre and watching a live show provides a connection with the people around you and the people on stage. In live theatre, there is a kind of magic that people can only experience with a live theatrical production.

The Rise and Fall of Little Voice runs at the Walnut Street Theatre through April 13,2014. For more information and tickets visit their website at www.walnutstreettheatre.org or call their box office at, 215-574-3550.

Great actress. Enjoyed her performance yesterday @ the Walnut Theater. Denise was perfect playing the role Louise Seger in Always...Patsy Cline. Especially surprised when she asked me to dance with her during the show - Didn't want to leave her go. Denise had everyone at the show clapping, singing and having a ball.