Behind the Scenes: David Elder Talks About Playing Bert in MARY POPPINS and the Magic of Live Theatre 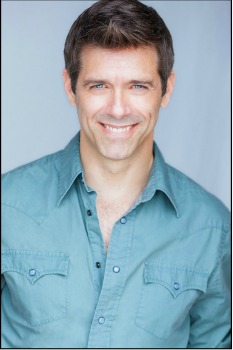 Disney and Cameron Mackintosh’s Mary Poppins is currently at the Walnut Street Theatre in Philadelphia this holiday season. I had the opportunity to talk to David Elder who is playing the role of Bert, the chimney sweep and longtime friend of Mary Poppins. Elder spoke with me about playing Bert, as well as what a privilege it is for him to play the role and help tell this story. Additionally, he spoke with me a bit about the magic of live theatre, and why live theatre it is important.

Kelli Curtin: Tell me a little about your character?

David Elder: I play Bert, who is a surprising guy. I find something new with him all the time. My take on Bert is that Mary Poppins was his nanny when he was younger, and he has an affection for her throughout the show. Mary Poppins is a figure who never ages and she is just magical. Bert is just a good hearted and good natured person, and he wishes good things for everything he encounters.

In addition, Bert understands Mary Poppins’s plight and enjoys helping her. Bert picks up where she left off teaching lessons to the children. I like to think of Bert as a guardian angel type of guy who picks up on what is going on in the lives of others and tries to help. Bert hears all kinds of things from being a chimney sweep.

Lastly, Bert has an affection for Mary Poppins, but knows he cannot express the romantic truth. He struggles with this, and he wants to be closer with her. In the end, when Bert has to say goodbye to Mary Poppins it is bittersweet.

Kelli Curtin: How do you prepare yourself to play such a well-known role?

David Elder: I have always loved the Disney movie. Dick Van Dyke is amazing, I really connect with his performance in the movie, and it makes 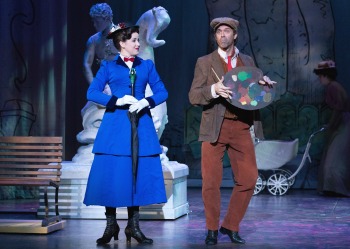 me smile. I try to bring the essence of Van Dyke when playing the part, I see his characterization of Bert as jolly and he is nimble, but I try to deliver this as well as my own take on the character. In addition, I prepared myself physically because I have some energetic dance numbers.

Kelli Curtin: Do you have a favorite part of Mary Poppins?

David Elder: I have several. First, I have to say “Supercalifragilisticexpialidocious.” I did this show a year and a half ago with Lindsey [Bliven]. We had to learn the number in five days, and it is one of the more challenging numbers to learn. Although, once we learned the number it was hugely rewarding. This time “Supercalifragilisticexpialidocious” is not as stressful or scary, and it is one of my favorite moments in the show. I enjoy this number immensely.

One of my other favorite scenes is in the end when I give flowers to Mary Poppins. It is a bittersweet moment, but it is also a very emotional human moment.

It really is a privilege to tell this story. The entire cast of this show believes this. Bert is a character who needs to be strong, but he does this with a wink and a smile. We tell a warmer Mary Poppins story, and in the end it is really Mr. Banks’s story.

Kelli Curtin: What can audiences expect from the stage version of Mary Poppins? 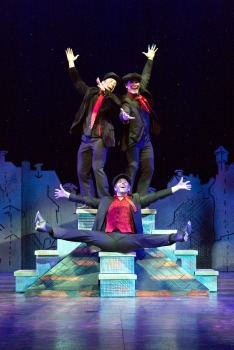 David Elder:  Unbelievable costumes. Audiences are sometimes surprised when they see Mary Poppins onstage. The stage show is a better show as a whole than the movie and it is a big show with lots of lavish production numbers. The stage version brings the movie to life, but in a different way.

Kelli Curtin: Are there characteristics of Bert you can relate to?

David Elder: I can relate to Bert throughout the show. I was raised in a blue-collar situation for twenty years. I am very used to being around hard working, blue-collar people. My dad fixed automobiles for a living. I have a sensitive understanding of people who work hard in order to have a good life.

I love Bert’s good-naturedness towards people no matter what their class. Humans are connected at the core – once we strip away the façade we are all connected as people. Bert and the chimney sweeps are the “Guardian Angels of the Rooftops.” This is something that I wish I could be to the people I love.

Kelli Curtin: Mary Poppins is an iconic story. Why do you think it still resonates today?

Kelli Curtin:  Do you have a favorite role you have played?

David Elder: When I was young, I watched the MGM classic movies all the time, and loved watching Gene Kelly. I had the honor of playing Don Lockwood in Singing in the Rain. For me Kelly feels like the every man, there is just something about him that felt approachable when I saw him in movies. I idolized Kelly, so when I was offered the part of Don Lockwood in Singing in the Rain I took on the challenge. It was a beast of a show, but it was so rewarding and I loved it.

I also loved playing Bobby Childs in Crazy for You. In playing Childs I had a chance to sing, dance, act and do comedy. I got to tap into my goofier side in this role. This is one of my favorite roles.

David Elder: Young actors need to have a deep commitment in doing their absolute best. My advice is to go into theatre if that is what you feel 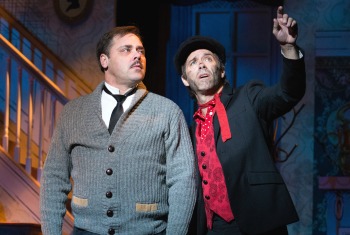 you absolutely have to do. If you do not love performing to the core it will kill you. In addition, see shows constantly. Learn from watching others on stage. Follow your dreams and do not turn away from them. View this career as an open window and learn to believe in yourself.

Aspiring actors should watch and learn, but never take this career for granted. People should take on the responsibility to take on information. For example, the way I learn is to visualize. I watch and then I copy it, but then I make it better and keep making it better to keep in fresh. Most of all, one must believe in the magic of theatre.

David Elder: There is no experience in entertainment like live theatre. People get to experience live theatre in the flesh, and it is organic. There are moments in live theatre that people will see something onstage and it will be touching like nothing else you have ever experienced.

In addition, there is a collective energy from the cast that is very powerful. When I am onstage there are a thousand people looking back at me and we all have the same goal to enjoy the evening. When I hear applause or laughter, I know I connected with the audience and I feel like I did my job. For me personally, I want to make people feel something, and when that connection happens there is nothing else like it. At the end of the show when I know the audience got what they expected, and all of us on stage took their mind off their troubles for a couple hours, I can exhale and feel a sense of satisfaction. I hope we never lose live theatre because it allows all of us to connect as humans.

Disney’s Mary Poppins runs at the Walnut Street Theatre through January 4, 2015. For more information and tickets visit their website at www.walnutstreettheatre.org or call their box office at 215-574-3550.