Behind the Scenes: Cynthia Thomas Talks about the Influence of AIN’T MISBEHAVIN’ and Jazz on the Landscape of American Musical Theatre 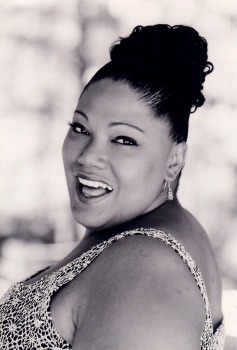 Last month Playbill.com named Ain’t Misbehavin’ one of the Broadway Musicals that “shaped the art form.”  The show was the first jukebox musical in which actors performed timeless Fats Waller songs. Even today, this show is still relevant, and audiences love this celebration of the music of Fats Waller.

Delaware Theatre Company (DTC) ends their 2013/14 season with this energetic musical. This production is directed by Richard Maltby, who also conceived and directed the original production. I had a chance to speak with Cynthia Thomas who is in the current production at DTC. Thomas is dynamic and full of energy in this show. She spoke with me about the significance of Ain’t Misbehavin’, as well as the importance of Jazz and the Arts.

Kelli Curtin: Could you tell me a little about Ain’t Misbehavin’?

Cynthia Thomas: Ain’t Misbehavin’ is a lively musical. The show takes us through the life and times of Fats Waller through song and dance.

Jazz is Americana – jazz is a form of music we as Americans have created. We, as Americans, have not embraced the importance of jazz as an art form. Ain’t Misbehavin’ celebrates the music of the Jazz Age.

Kelli Curtin: What can audiences expect?

Cynthia Thomas: Anyone coming to the show, even if you are not familiar with Fats Waller or the music of the 1930s and 40s, will have a great experience.  The fun and joy each one of us is having permeates throughout the theatre. After the show, anyone not familiar with Waller will want to learn more about him and his music.

Ain’t Misbehavin’ is a classy show with a bit of cheekiness, sassiness and a touch of naughtiness, but there is nothing inappropriate in the show. The show also showcases five different individuals with different body types. Not everyone is a stick and Ain’t Misbehavin’ honors people of all sizes in a way that we can all appreciate.

Kelli Curtin: Why do you think Ain’t Misbehavin’ is important to the history of American Musicals?

Cynthia Thomas: First, in the last month, Ain’t Misbehavin’ has been named one of the most influential Broadway shows by Playbill.com. In addition, the show changed the face of Broadway musicals because it is not a book show; it was the first jukebox musical.

Ain’t Misbehavin’ also glorifies the music of the jazz age. It celebrates the music of Fats Waller. Additionally, it shows audiences that the people who lived in this age dressed to the nines even if they shopped at Woolworths. Women never left their home without their stockings, hat and gloves.

Cynthia Thomas: I have many favorites, it is such a fun show. I would have to say “Find Out What They Like.” Kecia Lewis and I perform this duet together and we play off each other in this number. The other song that is one of my favorites is “Black and Blue.” I like what the lyrics of this song says, and when we perform this number, it is just a piano and us [the entire cast.]

Cynthia Thomas: I am an old soul – I love to watch black and white films. I love Shirley Bassey, she is incredible and is still incredible. When I perform I pull from different eras – Whitney Houston, Patti LaBelle, Judy Garland, Frank Sinatra, Luther Vandross, Stevie Wonder – I am eclectic with my music.

Kelli Curtin: In your opinion, why do you think live theatre is important?

We perfected musical theatre in America and we need to treasure it and hold it precious because if it is lost we will never get it back. The Arts as a whole is important too. The Arts are important to a person’s learning and well-being, it links into who we are as people. If we lose theatre and the Arts, what will we have left to connect to?  No one can articulate how the Arts influence their lives.

Ain’t Misbehavin’ runs at the Delaware Theatre Company through April 27, 2014. For more information and tickets visit their website at www.delawaretheatre.org or call their box office at 302-594-1100.