Behind the Scenes: Cary Michele Miller Talks about Playing Smitty in HOW TO SUCCEED . . . at the Walnut Street Theatre

How to Succeed in Business without Really Trying is currently on the mainstage at the Walnut Street Theatre. The show is very entertaining, full of great performances and production numbers. I had a chance to speak with Cary Michele Miller who plays Smitty, the secretary who provides guidance and advice to the younger secretaries. Miller spoke to me about the How to Succeed, as well as some of her other favorite roles she has played.

Kelli Curtin: Could you tell me about How to Succeed in Business without Really Trying? What can audiences expect?

Cary Michele Miller:  The show is about an ambitious man who is a window washer. He reads a book, How to Succeed in Business Without Really Trying, and he rises through the corporate world. Throughout the show, he meets Rosemary, who eventually becomes his love interest. There are so many fun stories within stories.

Cary Michele Miller: I play Smitty who is friends with Rosemary. She has been around the longest of all the secretaries with the exception of Mrs. Jones. She always has advice to give to the other secretaries, and she tries to warn Rosemary about Finch. Smitty has a very dry sense of humor, and she is a lot of fun to play.

As far as seeing myself in this character, I am one of the older people among the girls, and I can take the “motherly” instinct. I tend to help people through things, and pass advice down to people when I can. I have “rounder” edges than Smitty, but I always am willing to help with supportive advice.

Kelli Curtin: Why do you think How to Succeed. . .  is important to the history of American Musicals?

Cary Michele Miller: Winning the Pulitzer Prize is huge. Also, the show is typical of the period the show was written [1961], men held high 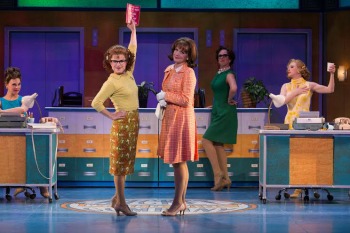 positions and women were secretaries. Although in this show, the secretaries are portrayed as strong women – and in that aspect it is a little forward thinking. The show is a satirical look into the world of Big Business and someone’s rise to the top.

Cary Michele Miller: “Coffee Break” is a really fun number. It is a fun group to do a production number with, and enjoyable to do.

Kelli Curtin: Who is your greatest influence as a performer?

Cary Michele Miller: I would have to say people I have worked with in the past. In 2008, I did State Fair at the Walnut Street Theatre, and Mark Jacoby and Dee Hoty played my parents. Working with these two actors was influential. In addition, my husband, Aaron is pretty amazing and very supportive.

Kelli Curtin: To date, what has been your favorite show you have been in?

Cary Michele Miller: There have been so many shows I have loved doing. The ultimate role I loved doing was Peter Pan in Peter Pan.  I also had a chance to play Jo in Little Women.

Kelli Curtin: Is there a role that you would consider your “dream role”?

Cary Michele Miller: I do not know if the roles I want to play I would consider dream roles; I already played my ultimate dream role, which was Peter Pan. In the future, I would really like to play Annie Oakley in Annie Get Your Gun and Eponine in Les Misérables. I am excited to start to play the next age level of characters.

Kelli Curtin: Why do you feel Arts is important to the community?

Cary Michele Miller: I think the Arts gives people a great escape. In theatre, it is right in front of you, live. Every audience is different and each experience in unique – the audience and cast and crew are all in it together. It is an experience in which people can laugh and cry together and be one with everyone around them, it is a unique experience that does not happen anywhere else.

The Arts is also really important to children. They need the Arts to feel accepted and be able to express themselves.

Go see Cary Michele Miller and the rest of the phenomenal cast in How to Succeed in Business without Really Trying at the Walnut Street Theatre. The show runs through July 13, 2014. For more information and tickets visit their website at www.walnutstreettheatre.org or call their box office at 215-574-3550.