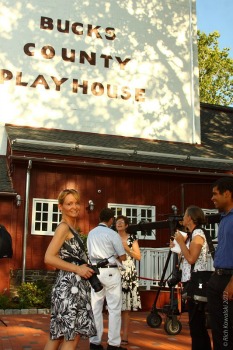 Kelli Curtin: Could you tell me a little about the exhibit, “Local Mill Makes Good: Celebrating 75 years of American Theatre at the Bucks County Playhouse” at the Michener Art Musuem?

Mandee Kuenzle:  It is a collection of the Bucks County Playhouse’s artifacts including photos, playbills, posters, and mini set designs. The artifacts are from the Playhouse’s inception in 1939 until today.

Kelli Curtin: Are there any particular pieces of the exhibit you are most proud of?

Mandee Kuenzle: It is exciting to see photos from the past year and a half since the Bucks County Playhouse reopened. Also, seeing all the great memories these photographs captured such as the photos from Misery and Mame. For me, I am proud to see my own bio next to this history filled exhibit. In this exhibit the photographs were taken by three photographers, and I am the only living photographer in the exhibit.

Kelli Curtin: How did you first get interested in photography?

Mandee Kuenzle: I started with a pad of paper; it was not until later that I became interested in photography. I always enjoyed being creative through drawing cartoon-like characters or painting. Then I picked up a camera and realized I could get visual messaging through the camera. After college I worked in advertising, and I was frustrated with the quality of the pictures that were in ads, so I began taking my own to capture the essence of the message I was trying to convey. My boss supported the taking of my own pictures. My favorite subject has always been people and through photos I was able to capture the personality and character of a person.

In my position at the Bucks County Playhouse, it is similar with stories we put in the press. I capture the essence of the play or musical we are producing, and we get more attention and readership through the photographs of the shows.

Kelli Curtin: What is the source of your inspiration related to your photography?

Kelli Curtin: What gives you the most fulfillment as a photographer and in the theatre?

Mandee Kuenzle:  As a photographer seeing my photos in the press and in the exhibit is satisfying to me. Just knowing I am capturing the spirit of people, characters and shows and people are getting enjoyment out of looking at my photos is fulfilling.

Kelli Curtin: Is there anything you hope people will take away from this exhibit?

“Local Mill Makes Good: Celebrating 75 years of American Theater at the Bucks County Playhouse” is at the Michener Art Museum through March 2, 2014. For more information visit their website at www.michenermuseum.org.