Behind the Scenes: Ben Dibble Talks About HARVEY and Playing Elwood P. Dowd 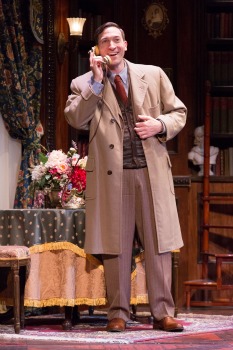 Harvey is currently onstage at the Walnut Street Theatre. This show is about a man, Elwood P. Dowd, who has a friend, Harvey, who happens to be a six foot tall rabbit that no one else can see. I had the opportunity to speak with the delightful Ben Dibble, who is playing Elwood P. Dowd in the Walnut’s production of this play.  Dibble spoke with be about the show, as well as why this show is still important and still resonates with audiences seventy years after the play originally premiered in 1945.

Kelli Curtin: Could you tell me a little about Harvey?

Ben Dibble: Harvey clearly was a show ahead of its time when it was first produced just after World War II and before the prosperity of the 1950s. The play is very much about being different and what that means. It also raises a lot of interesting questions that are still widely relevant about what is mental illness. One of the great questions in the play relates to figuring out if Elwood is actually mentally ill or if he is the smartest person in the room – the most aware. Personally, I like to think that he is the most aware person in the room. And I get to play this role with such humor and such humanity. What makes this play such a joy to do is that everyone can relate to it. At the heart of it, it is a play about the power of friendship.

Elwood is the only character who really listens to everyone. The delight about him is he really is always listening, paying attention and hearing things that others do not notice. Elwood says, “For years I was smart. I recommend pleasant.” That is the hook of the play, he walks through the world with a generous spirit.

Kelli Curtin: Why should audiences come out and see this show?

Ben Dibble: First, for the stellar cast of local actors, all of whom are just wonderful and a delight to see play together. Also, because this story has a lot to say about how, as a society, we deal with those people who choose not to conform. It asks the question how do we deal with people who do not conform to society’s expectations on how people should act? This theme was relevant when the play first came out, and it is still relevant today. This comes through in the character of Veta, the conflict of her wanting to fit into this upper echelon of the Midwestern small city, and feeling ashamed of Elwood until the end when she realizes the real importance of him. And, how important Elwood is to her.

Kelli Curtin: Tell me a little about your character, Elwood P. Dowd.

Ben Dibble: Elwood is a delight. I really get Elwood. Affability has been one of my ways of walking through the world, as it is to Elwood. Being pleasant is of very high value to me, as a professional and the way I work, and the way I want people to engender comfort in the room. I think it is important to be present in a room and caring about those I encounter, this is imperative to me as both a performer and a teacher. I absolutely relate to Elwood on that level of being cordial and his desire to always be having a wonderful time. It is important to Elwood to be pleasant in a real way, he does not believe in small talk, he believes in sincerity. I love that about this character, and it may seem like small talk in the way the script plays out, but it is not to Elwood, he really tries to get to know someone in a very real way in a short amount of time.

Kelli Curtin: You need to be this character who is immediately likable. What is it about Elwood that makes this unconventional character so likeable?

Ben Dibble: There is not a moment for Elwood that he ever lets negativity or anything else knock him off this wonderful pedestal in which he sort of floats through life. Late in the play there are these moments where people are bombarding him with wanting him to stay in the asylum and his whole approach is “I think that’s great, but I prefer not.”  In addition, there is nothing about Elwood that is threatening. The flirtation with women is completely safe and innocent. The whole point of his magic is people feel comfortable around him.

In the end of the play, there is a scene with a cab driver in which Elwood describes him as a “delightfully interesting human.” What I love about that moment is you get to see the concept of class at work, other characters look at the cab driver as a low class, blue-collar guy and Elwood sees him as an interesting human with an interesting story. Elwood is the most egalitarian title character ever, he sees everyone as equals. For example, he never puts his sister, Veta, above the cab driver. The audience totally responds to that because we all want that. We walk through the world having to deal with the hierarchy wherever we are; there is always our boss, and then the boss of that boss and so on. Elwood lives this wonderfully simple life of going places and meeting people and wanting to know more about them, and I think people would love the chance to do that. 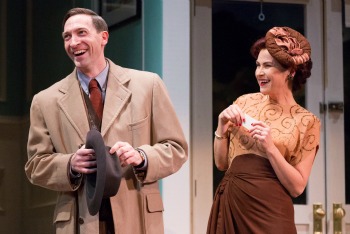 Kelli Curtin: In your opinion, are there any benefits or challenges to playing opposite an invisible costar?

Ben Dibble: There are good benefits, one is he never upstages you. Even if Harvey is standing directly downstage of you the audience can still see what you are doing. Seriously though, a challenge for me and what took me a while to settle into during rehearsals was just trusting that all I have to do is know where Harvey is with my eyes. He has to consistently be the same size. The challenge is – I have to convey that with my eyes. I have found places on the set to use, so I can quickly look at those spots and know it is the right height for him. My big concern is that I did not want him to be shifting height, it is all about me being consistent. That was my biggest challenge – how to stay consistent to make sure I am conveying Harvey’s size.

Kelli Curtin: This play was popular was popular in 1945, and it still resonates today. Why do you think this story is still popular?

Ben Dibble: The story is still very relevant for a few reasons. First is that we still have not come to terms as a society with what mental illness means, and how we deal with it as a society. It is still something everyone whispers about. All the shame that Veta and Myrtle Mae feel, everyone can relate to and see examples of in their life. It does this in a way that is funny and engaging, and it is a theme that is funny and prevalent today.

Also, people, particularly in America, are worried about how others are perceiving them. That’s the media and magazines telling us all how to look better and be more successful. We are all conscious and worried about what people are thinking about us all the time. To have a play that is about a character that is oblivious to that is delightful. I think if someone went up to Elwood and asked him what people thought about him I do not think he would even know what that meant, it wouldn’t even occur to him as something to have an awareness of. People delight in the fact that Elwood can walk through a conversation and miss entire portions of what people are worrying and stressing about.

I feel Elwood is the anti-rat race. The play pre-dates the post-war era, but it still feels relevant. The play feels like it is a commentary on what 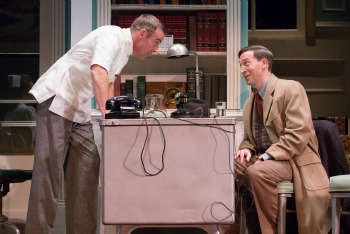 was to come after World War II, the 1950s and the rat race that became the American that we know – an image where America is striving and prosperous. Elwood meets people and finds joy no matter what, and he never looks at the negative.

Kelli Curtin: As an actor, what gives you the most fulfillment onstage?

Ben Dibble: Personally, what gives me the most fulfillment is when I feel like I am finding the moment, whether it be a musical moment or the beat of a scene, where I can feel the audience breathe with me. Where I know I have the audience with me and have made a connection with the audience. It is that perfect synthesis in which you are completely engaged in the moment as the storyteller who is bringing themselves to the moment fully. There is this perfect trinity between the moment, actor and audience, and you are really breathing life into it. That is why actors do what we do, the connection between the moment, actor and audience, it is fulfilling.

Ben Dibble:  Culturally at this point in time with the explosion of media, online consumption and phones, the only two places in our culture where a bunch of people sit in a room together and listen to a story told to them together are church and the theatre. I do not think that is an accident or something we should discount. I am not saying theatre is a religious experience, but there is something sacred about being in the same room with actual people sharing a story with you. People receive the story differently seeing a movie or television show. There is something about real human interaction that is very unique, and we do not have a lot of that anymore, and I think that is important.