Behind the Scenes: Ben Dibble Talks about ARSENIC AND OLD LACE and the Importance of the Theatre 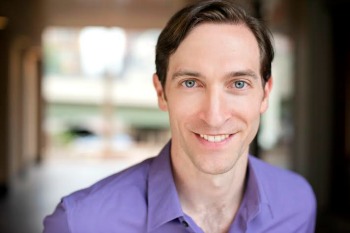 The play Arsenic and Old Lace is a co-production between the Fulton Theatre in Lancaster, Pennsylvania and the Walnut Street Theatre in Philadelphia. It is a show full of mystery, murder and mayhem. Ben Dibble plays the role of Teddy in the play, and he is very energetic in his performance. Dibble is a Philadelphia based actor who has been seen in countless productions in the Philadelphia area. Some of his best known roles are Lee Harvey Oswald in Assassins, Leo Frank in Parade, Leo Bloom in The Producers and Thomas in The Story of My Life. It is great to see Dibble on stage in Arsenic and Old Lace, and he was kind enough to talk to me about his role and his career as an actor.

Kelli Curtin: Tell me about your character in Arsenic and Old Lace.

Ben Dibble: I play the character of Teddy, who is the nephew of the two aunts, Abby and Martha. Teddy is convinced that he is President Teddy Roosevelt and throughout the show, he runs on and off stage reenacting moments in Teddy Roosevelt’s life.

Kelli Curtin: What did you do to prepare for this role?

Ben Dibble: I researched Teddy Roosevelt. There is a trilogy of books written by Edmund Morris. I read Theodore Rex, which covers the years of 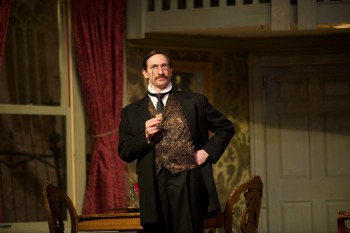 Roosevelt’s presidency. This book was a fantastic and thorough picture of who Roosevelt was. Additionally, this book covers the period of Roosevelt’s life that Teddy fixates on, and that was very helpful.

As an actor, I try to portray what is in the script and I try to be in the moment for the characters I play. For Arsenic and Old Lace, I walk on stage with a lot of energy. This role is a change of pace for me from Leo Frank. [Leo Frank is a character in the musical Parade that Dibble recently portrayed at the Arden Theatre in Philadelphia.]

Kelli Curtin: What can audiences expect from Arsenic and Old Lace?

Ben Dibble: Arsenic and Old Lace is a type of play that is not being written as much today. It is a tight comedy that is intelligent and also has subtle humor. It is a madcap show, that has a lot of slamming doors and characters running on and off stage.

Kelli Curtin: Who is your greatest influence as an actor?

Ben Dibble: First in my personal life, I would say my wife, Amy. I met Amy at the Arden Theatre where she was the Associate Artistic Director. She knows me as a person and an actor. One of the joys of marriage is that she tells me exactly what she thinks of my performance and helps me find balance. She also helps me find my way as an actor without contradicting the director of a show I am in. Amy is a wonderful support to me, and she is my rock.

Second, as far as an actor I am influenced by people who do a little bit of everything. For me this would be Victor Garber. Garber has performed in television, films and shows on Broadway. Garber is working all the time in different settings. He is one actor who still has a life and has not been devoured by the fame machine.

Ben Dibble: I am from a small town, Wyalusing, Pennsylvania in Bradford County. My family was active musically and theatrically. My family did shows at a community theatre, they were always performing in some way because they loved it. At the age of 16, I decided I wanted to act professionally, and I eventually went to the University of the Arts in Philadelphia and received my BFA. I have a very supportive family and am very lucky because my family did not try to push me away from performing professionally.

Kelli Curtin: In your opinion, why is theatre important?

Ben Dibble: Culturally, there are only two places left where people come together, sit in a room and collectively witness something – those places are theatre and church. When Tracy Letts won the Tony in 2013 for his performance in Who’s Afraid of Virginia Woolf? he said in his acceptance speech, “We are the ones who say it to their faces, and we have a unique responsibility." It is a great summation of the responsibility of performers. In addition, it is rewarding when people come together, respond to jokes, and are emotionally moved by what they have just witnessed on stage. It is great to have the audience’s reaction to the way that all involved with a theatre production communicate the stories of a show.

Ben Dibble: Leo Frank in Parade required every fiber of my being and I was thrilled to play him. Also Freddy in Dirty Rotten Scoundrels. It was great being a character different from the serious ones I play, and being a total creep in a show, it was the most fun I have had on stage.

I am now at the age where I get to play the “dad” roles. I would really love to play Archie in The Secret Garden or John Adams in 1776.

Arsenic and Old Lace is at the Fulton Theatre through February 16, 2014. For more information about the performances at the Fulton visit their website at www.thefulton.org or call their box office at 717-397-7425. If you cannot get to the Fulton, this show will also be at the Walnut Street Theatre in Philadelphia from March 11, 2014 through April 27, 2014. For more information and tickets for Arsenic and Old Lace at the Walnut Street Theatre visit their website at www.walnutstreettheatre.org or call their box office at 215-574-3550. Do not miss this excellent production that keeps audiences laughing throughout the entire show.