Behind the Scenes: Andrew Keenan-Bolger Talks About EVER AFTER and Offers Advice for Aspiring Actors 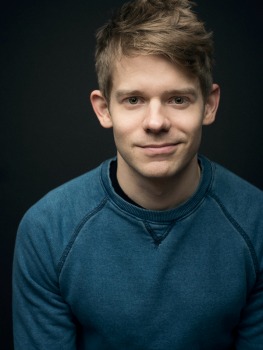 The world-premiere musical, Ever After, opens this week at Paper Mill Playhouse. This musical, adapted from the 1998 film starring Drew Barrymore, is a retelling of the classic fairytale, Cinderella. This highly anticipated show is being directed and choreographed by three-time Tony winner Kathleen Marshall. It also is featuring an all-star cast: Christine Ebersole, Charles Shaughnessy, Margo Seibert, James Snyder and Andrew Keenan-Bolger.

I had the opportunity to speak with Andrew Keenan-Bolger who plays Gustave, a friend of the protagonist of the story, Danielle. Keenan-Bolger was most recently seen as Crutchie in Newsies. He spoke to me about Ever After, and what audiences can expect. In addition, he talked about the magic of seeing a live show and the importance of live theatre.

Kelli Curtin: Could you tell me about Ever After?

Andrew Keenan-Bolger: Ever After is a retelling of the fairy tale Cinderella, and it is also based on the 1998 film, Ever After. The musical is grounded in reality; it takes place in the 1600s in France. The show is a realistic depiction of people. We are calling this a “feminist Cinderella.” The girl in the story is a match for the prince, and she really is in control of her own world. She does not need him to rescue her, she is strong-willed, and teaches him a few lessons throughout the show.

Kelli Curtin: How would you describe the story and music of the show?

Andrew Keenan-Bolger: It is an old-fashioned throwback musical reminiscent of Rogers and Hammerstein or Jerome Kern musicals, but with a contemporary twist. The show is a Broadway love story that has sweeping melodies. In Ever After, the writer and composer took a story we all know, Cinderella, and tell it in a new way.

Kelli Curtin: What can audiences expect to see when coming to see this show?

Andrew Keenan-Bolger: They can expect a big musical that is a period piece, with big sets and musical numbers. This show is full of theatre magic, not necessarily special effects, but theatre magic in watching this story come to life onstage. Ever After is a great family show. With all the princess saturation today, this show is great for young people to see because Danielle, the protagonist of the story, is a great role model.

Personally, I hope many families come see this show because one of my favorite things is to perform for young audience members. I remember seeing my first show, and the impact it had on me. It was a magical experience for me. It is magical for kids to see live theatre, and knowing that there will be people in the audience who have never seen a live theatrical production is exciting for me.

Kelli Curtin: Could you tell me about your character, Gustave?

Andrew Keenan-Bolger: He is the childhood best friend of the Cinderella character, and he also is a servant. Gustave is an amateur artist, and Leonardo daVinci has taken him under his wing. This story is grounded in reality, and there are some historical characters that make an appearance like daVinci. Ever After is a retelling of a fairy tale, but there are historical figures, which I think make this musical unique.

Kelli Curtin: Why do you think it is important today to reinvent the telling of a fairy tale like Cinderella?

Andrew Keenan-Bolger: Cinderella is a story that people grew up hearing, and they also have an emotional connection to it. People have a familiarity with the story and expect certain aspects of the story, although what Ever After does is blows this story open in a new way. This musical has reinvented the classic fairy tale, and made it more realistic. Ever After makes more sense and the characters of the story earn the story that they get. For example, the protagonist teaches the prince lessons such as what it is like to be of a lower class. She is witty and smart, and really a match for the prince.

Andrew Keenan-Bolger: I think I did. I have two really cool older sisters [Celia Keenan-Bolger and Maggie Keenan-Bolger] who are performers, and they really were influential on my choice to be an actor.

Kelli Curtin: Who influences you?

Andrew Keenan-Bolger: Right now, the actors who are able to use their prominence as a way to have a positive influence, inspire me. People like Gavin Creel, Rory O’Mally and Audra McDonald all use theatre as a tool for social change. By using social media, people are able to use their influence as a platform to discuss bigger issues.

Andrew Keenan-Bolger: In live theatre, there is a direct connection with the audience. There is a direct line between an actor and the audience that encourages an empathetic response. Performing live in a theatre is a way we can get our ideas across because it is a medium where it is more personal and it provides a way to understand the people around us. Live theatre is a more intimate and personal experience than other formats.

Theatre is a place that is unique because there is only one place and one moment that you see that one particular performance. With television and movies, people can experience the same thing over and over, and it is always the same. In theatre, something is always different and unique with each performance. Live theatre is a special and sacred space, and it offers people a once in a lifetime experience.

Andrew Keenan-Bolger can be seen in Paper Mill Playhouse’s production of Ever After. Ever After runs through June 21, 2015. For more information and tickets please visit their website at www.papermill.org  or call their box office at 973-376-4343.

Photo 2:  Photo by Jerry Dalia. Andrew Keenan-Bolger in Paper Mill Playhouse’s Ever After.