Behind the Scenes: An Interview with Robert Brock – the man behind Hole in the Wall Puppet Theatre 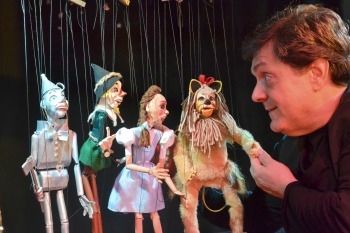 The longer I become involved in the theatre scene in Lancaster, the more people come up to me and tell me about theatres I should visit. Last summer, I was told about Hole in the Wall Puppet Theatre, and my husband and I visited the theatre for one of their shows. I immediately became intrigued not only by the theatre, but by the person who writes the show as well as designs the puppets and marionettes for the productions, Robert Brock.

Brock has a great passion for his work and a deep love of the arts. I had an opportunity to speak with Mr. Brock about the inspiration behind Hole in the Wall Puppet Theatre as well as all the hard work and detail that goes into creating the marionettes.  He took me on a tour of the theatre as well as talked to me about his current shows “The Wizard of Oz” for children and “Legends: Dames and Divas” for adults.

Kelli Curtin: Could you tell me how you became interested in creating marionettes?

Robert Brock: It really was a matter of necessity. My arms were shot from using the hand puppets because using those puppets I had to have my hands above my head constantly. The controls I use on the marionettes I create are based on the controls of the Salzburg Marionette Theatre, which is a theatre in Salzburg, Austria. It is a long process, but it is much easier on my arms. I have been creating the marionettes for over 10 years, the first show I did with the marionettes was “The Little Mermaid.”

Kelli Curtin: What goes into creating a marionette?

Robert Brock: I begin my process by finding a person or character I am passionate about. Then I have to figure out how to cut the cast down, sometimes the sculpting is easy and other times it is more difficult. Also, the marionette I am creating has to look like the figure. For example, when I made the Liza Minnelli puppet, I was pleased with it, but it took a long time. I was also delighted that the Dorothy marionette I use in the Wizard of Oz show looks like Judy Garland.

When it comes to the costumes for the marionettes, I pick iconic looks for them. For Liza I used her outfits form The Act, Cabaret , and “New York, New York.” I used the iconic look of a gorgeous ballroom gown for Billie Holiday.

Kelli Curtin: How did this theatre start?

Robert Brock: Originally in the 1980s it was an art studio, a shared studio space. When the landlord of this building died, my parent bought it, and we did things to the space such as elevating the seats. When my father died 10 years ago, we built an apartment upstairs, and now I can go downstairs and be at work.  My mother, Mary Lou Broucht, is the business manager and house manager. Without her we would not be here. When people come to the theatre she, and Luke, her poodle, greet them.

Prior to the 1980s I used to tour with my “Robert Brock Puppet Theatre”. I have been working with puppets my whole life; my sister says that I stole her Sleeping Beauty Puppet Theatre. I grew up watching “Percy Platypus and Friends” on WGAL, and seeing Bil Baird’s marionette theatre (Baird was known for the marionettes in The Sound of Music movie.) Eventually, I became involved with the Fulton Theatre, and would have done anything to be at the Fulton: props, paint, clean, and I worked in their box office. After high school, I went to the Boston Conservatory and majored in Musical Theatre.

Kelli Curtin: What gives you inspiration for your shows?

Robert Brock:  The show has to be something I am passionate about. I also need to be able to perform the impressions.  In addition, the costumes I use have to look good. The show and the costumes have to work together to provide good entertainment.

Kelli Curtin: What can people expect from your show “Legends: Dames and Divas?”

Robert Brock: They can expect to be entertained from beginning to end. If someone has never been to Hole in the Wall Puppet Theatre, it is like nothing you have ever seen. The shows I do are full of passion, sincerity and will touch the heart. It is a show full of illusions and impression, and the audience will enjoy every moment.

Every show that is performed here I write, whether it is a kids show or a show for adults, it is an original piece of work. I once heard Shari Lewis say that people should not write down to children, and that is advice I follow. During the children’s show is it wonderful to see when parents and children are both into the show, and when they all laugh during the show.

For me, I never consider myself a puppeteer, I consider the puppet an extension of myself as an actor.

Kelli Curtin: What gives you the most fulfillment as a performer?

Robert Brock: If everything is working and people are reacting to what they see, I get goosebumps. In addition, one of the more fulfilling things is knowing the audience gets what is going on onstage, and reacts. One of the most fulfilling experiences I have had recently is Donna Drake [she directed Buddy:The Buddy Holly Story at the Fulton Theatre] and Sam Weber [who played Joe B. Maudlin, the bassist, in Buddy] both came to see my show. They appreciated the work I do at this theatre, and I was thrilled to have them here to see one of my shows. I am very lucky to do what I do.

I love Lancaster, I am a native of Lancaster, and I am proud to live here. One of the great benefits about living in the city is that I can walk everywhere.

Kelli Curtin: Do you have a dream show to do one day? Is there a favorite show you have done?

Robert Brock: As for shows I would like to do at the Hole in the Wall Puppet Theatre: Babes on Broadway, Hollywood Dames, Pollyanna, Little Women, A Christmas Carol, Secret Garden, The Canterville Ghost, and Don Quixote. For people I would like to incorporate into my shows someday: Carol Channing, Angela Lansbury, Totie Fields, Phyllis Diller, and Mary Martin.

As for shows I have acted in I would say Man of La Mancha and Cabaret.

The current show for children at Hole in the Wall Puppet Theatre is The Wizard of Oz, which runs through June 21, 2014, and the show for grown-ups is Legends: Dames and Divas and runs through May 24, 2014. For more information about Hole in the Wall Puppet Theatre please visit their website at www.holeinthewallpuppets.com or call the theatre at 717-394-8398.

He is an amazing man! This was a great interview