Behind the Scenes: Amanda Rose Talks about 9 TO 5: THE MUSICAL at the Walnut Street Theatre 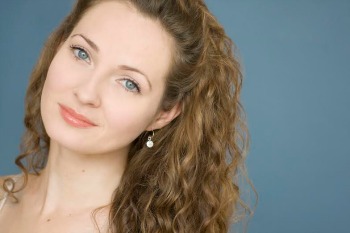 The Walnut Street Theatre will open their 206th season with the musical comedy, 9 to 5: The Musical. This show is based on the iconic movie of the same name and features music and lyrics by Dolly Parton. According to the Walnut Street Theatre this show is “Brassy, thought-provoking and sprinkled with a little romance, 9 to 5 is a story of friendship, delicious revenge and getting ahead in the Rolodex era.” 9 to 5: The Musical is sure to be an entertaining and fun show.

I had a chance to speak with Amanda Rose who is playing Judy Bernly in the production at Walnut Street Theatre. This show marks Rose’s debut at Walnut Street Theatre. Rose’s Broadway/National Tour credits include Nessarose in Wicked and Laurey in Oklahoma!  She also has numerous regional theatre credits that include theatres such as Paper Mill Playhouse, Pittsburgh CLO, and Bristol Riverside Theater. Rose talked to me about playing the role of Judy in 9 to 5: The Musical as well as advice for aspiring actors.

Kelli Curtin: Could you tell me a little about the musical 9 to 5? What can audiences expect?

Amanda Rose: 9 to 5 was an iconic movie in the 1980s. When I was a kid it was on television frequently, and I remember thinking it was funny. Although now, as an adult, I realize the significance of the movie. The stage adaptation is wonderful; it is full of music by Dolly Parton, who is one of my heroes. The stage version stays very close to the movie. The production at the Walnut Street Theatre has an amazing cast, and everyone is so talented.

When audiences come see 9 to 5, they can expect to laugh a lot. The show will take audiences back to a time where women were the secretaries and the men were management. Women did not have the ability to fix problems within the workplace or make as much money because of their gender. There are a lot of references to the 1980s, so there will be nostalgia for that period for some people.

Kelli Curtin: How would you describe your character, Judy?

Amanda Rose: I play Judy Bernly, who Jane Fonda played in the movie version. Judy is kind of a mess, she is recently divorced and she is working for the first time in her life. She goes through some of the biggest journeys in the show, and she finds a completely different life. I get to sing this song, “Get Out and Stay Out,” which is a great song with a message in it. What I like about playing Judy, is that she changes so much. In the beginning, she is neurotic and deflated, and eventually she blossoms and it is a coming out experience.

Kelli Curtin: Are there any characteristics of Judy that you can relate to?

Amanda Rose: Yes, in certain ways. On the surface, I have dated some bad guys, just like her. I can really relate to having a first time office job. When I first moved to New York, I had to temp. Until that point I had never worked in an office, and I felt like Judy. I remember that day very clearly, I know exactly what it is like to start an office job for the first time.

In the second act of 9 to 5, I can definitely relate to Judy more easily. She begins on a journey and evolves and grows, and that is something I can understand.

Kelli Curtin: 9 to 5 was a popular movie in the 1980s. Why do you think this show is still popular?

Amanda Rose: Many people connect with Dolly Parton and her music, and she is truly amazing. In addition, there is still that connection with the underdog that people understand and identify with. In 9 to 5, there are characters not getting their fair chance in life, and the storyline in both the movie and the musical shows someone being oppressed in some way. Today, people still identify with this.

Kelli Curtin: Did you always want to be in musical theatre?

Amanda Rose: Yes. I originally wanted to be a ballerina. I also wanted to sing and dance. Eventually my mom took me to New York City, and that was where I saw my first musical. Once I saw all those people onstage, I knew that was exactly what I wanted to do.

Kelli Curtin: Do you have a favorite role you have played? Is there a role you would consider your dream role?

Amanda Rose: Playing Judy in 9 to 5: The Musical is becoming one of my favorite roles. I also enjoyed playing Laurey in Oklahoma!, I played Laurey in the First National Tour, and in this version I was able to dance in the dream ballet sequence. This is everything I wanted to do at the time. Also nothing can beat being Nessarose in Wicked, I played this role on Broadway and on the First National Tour.

As for dream roles, I was recently able to perform one of my dream roles as Louise in Gypsy. Other roles I would like to play are Lola in Damn Yankees and Fantine in Les Misérables.

Amanda Rose: Do not rely on any one person’s advice, talk to several people. Make sure you talk to as many people as you possibly can, because one person’s experience will differ from another’s. Also, know who you are, and know what you need. Not everyone is the same as you, and everyone has different experiences.

Amanda Rose: Live theatre is so different from anything else people experience in watching other media such as television or movies. To be able to be in a room where people get to participate in live theatre collectively is magical. In live theatre people are in a space all together experiencing something that is moving; it is surreal that the magic of theatre is happening right before our eyes. Additionally, in a musical, there is a live orchestra and that just adds to the experience of being emotionally moved by live theatre.

9 to 5: The Musical runs at the Walnut Street Theatre from September 2, 2014 through October 19, 2014. For more information and tickets visit their website at www.walnutstreettheatre.org or call their box office at 215-574-3550.