Behind the Scenes: Alex Keiper Talks About Playing Martha in Arden Theatre’s THE SECRET GARDEN

Currently onstage at the Arden Theatre is The Secret Garden, a story about a young girl, Mary Lennox, whose family died in India due to a cholera epidemic. She is sent to live with her uncle, Archibald Craven, at his manor house in Yorkshire, England. Alex Keiper portrays Martha, the young chambermaid, in the Arden’s production of this show. Martha is a strong character who instills young Mary with strength throughout the show. Keiper has been described as an “up and coming Artist” in the Philadelphia area. I had the chance to speak with Keiper about the show, playing Martha and I also talked to her regarding any advice she had to offer to those interested in pursuing a career in the Arts.

Kelli Curtin: For people unfamiliar with The Secret Garden, could you tell me a little about the show?

Alex Keiper: The show is about a little girl, Mary, who is displaced from her home in India. She is living in India during the cholera crisis, and her parents die. Mary then has to go live with her Uncle Archibald in England. Mary is not used to the customs or the people in Yorkshire, so she has a difficult time when she arrives. The house is in the moors, and in a way haunted. One of the things that Mary mentions in the show is that it was always too hot in India to have a garden, and this is one of the things that she figures out that she can do at her uncle’s manor house. Two of the people at the house that Mary meets, Martha, a young chambermaid, and her brother, Dickon, help ignite Mary’s passion and assist her in seeing things in a new light. Dickon and Martha take the time to help Mary see how things grow and this is in direct relation to how Mary grows and her personality blossoms. Throughout the show Mary meets many troubled people who are living in the house, and she wants them to be able to heal, grow and flourish.

Kelli: Were you familiar with the show/story before being cast in it at the Arden?

Alex: Yes, I knew of the story. When I was a kid I used to watch two different movie versions of the story that were dark and mysterious. I would see this little girl in the story and I would see her world and how she viewed the world, I was fascinated with the entire story. The Secret Garden was one of my favorite stories and I loved hearing about the secret keys, doors and adventures in the story. This particular story made me obsessed with keys. Even now I have an antique key collection, which was inspired by this story. There is just something romantic about it. This story is about an adventure, but not a fantastical adventure, instead it is about the magic that is within you. I find that romantic and special.

Kelli: Why should audiences come out and see this show at the Arden? What can they expect?

Alex: This is a show that is for families, and it is a musical that will definitely keep both adults and kids invested in the story. This show also 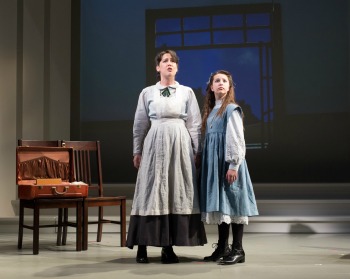 deals with heavy themes such as loss and the feeling of doubt that people experience wondering if they have the strength to go on after a tragedy. However, it is also a story of personal strength.

When people come see this show they can expect an amazing production. The concept by Terry [Nolen] and Jorge [Cousineau] is amazing and intricate. The concept is something new they are trying. The show focuses on the actors, and on the screen behind them is digital media that is used to enhance that story, but not to distract the audience from what is happening onstage. The concept is based on a doll house and is presented as a little girl looking in the dollhouse. The Arden is really dedicated to using multimedia in their productions, and we are so lucky to be able to use so many tools to enhance the stories that are told in live theatre.

Kelli: Could you tell me a little about your character, Martha?

Alex: Martha is young, and is almost at the bottom rung of the household, she is a chambermaid. She is an underling, and she does odd jobs around the manor. However, Martha is strong and has spirit. She serves as a guide for Mary who is struggling when she first arrives at the house. What I like about Martha is that she is strong, and the story takes place at a time when women were not expected to be strong. When things get hard for Mary, Martha helps give her strength to keep going. Martha is a strong female role model for Mary.

Kelli: What is it about Martha that appeals to you?

Alex: I am a teacher at the Arden and I do a lot of work with teens; I also direct the teen musicals. Teens deal with a lot of difficult issues such as bullying, body image and loss, and I find I can help the kids I work with by guiding them and helping them to communicate with their parents. I try to remind these teens just how powerful they are. I have taken what I have learned from my experience teaching at the Arden and applied that to Martha. I love her strength and how she guides Mary. Also I love working with Bailey [Ryon], we have a lot of fun together. Bailey is a kid who has to carry the whole show portraying Mary, and we all try to have fun with her and remind her that being in this show is fun.

Kelli: Do you have a favorite scene in the show?

Alex: There is a scene in act one between Mary and Dickon where Dickon teaches Mary to speak with the robin. Dickon teaches Mary to talk to the robin in a Yorkshire dialect. It is the first time Mary’s mood lightens and she enjoys the moment. I watch this scene from backstage, and it is amazing to watch and see Mary’s disposition transform. 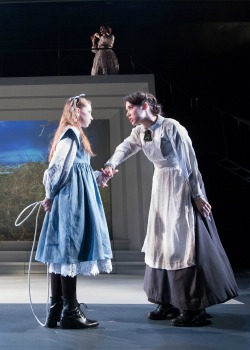 Alex: My dad was an actor. When I was young, probably around five, he taught me the Anne Frank monologue. However, before he taught it to me he asked me if I wanted to learn it and explained that it was really serious. It was at this moment I knew I wanted to do this for my career. It was not until college that I began to sing.

Kelli: You have been referred to as an “up and coming Philadelphia artist.” Do you have any advice for people who wish to pursue a career in the Arts?

Alex: A lot of colleges right now are teaching that you really to need to network to get work. And, as much as networking is necessary to a point, I have found that it is really more about establishing relationships. You need to be genuine and talk to directors and other people in the industry as people. Talk to them about their work, tell them what you enjoyed and be honest. Being courteous and genuine will get you more respect.

I began working at the Arden as a concessioner. I was dedicated and thrilled that I was able to work with this company. After this I starting teaching at the Arden and had the chance to audition. The Secret Garden is my tenth show at the Arden. Having a career in the Arts is fulfilling. Through my time here and getting to know Matt [Decker] and Terry [Nolen] they recommended me for a grant to attend the Atlantic Acting School. I am grateful for my time at the Arden and all it has taught me.

Alex: Personally, I am a huge fan of television, however, there is nothing like a chance to experience live theatre. As an artist in live theatre you must] have respect for the story and can never become selfish. You give yourself completely to the role, and this is so rewarding. Live theatre makes people think, you cannot be on the phone or talking, and you have to immerse yourself in the experience. The audience makes a promise when they enter a theatre to respect the story and be quiet. They sit back and become immersed in the story and respect the Artists. Live theatre creates a vocabulary unlike any other Art form.

Alex Keiper can be seen in The Secret Garden through June 19, 2016. For more information and tickets visit their website at www.ardentheatre.org or call the box office at 215-922-1122.