Behind the Scenes: A Conversation with Members of the Cast from Fulton Theatre’s ONCE 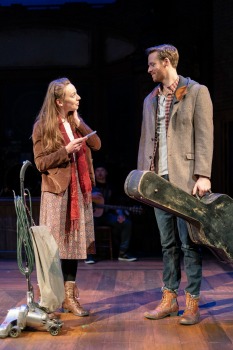 Currently onstage at the Fulton Theatre is the musical, Once. This show is about two young people who have music in their souls and meet by chance on the street in Dublin. The show has a lot of heart and is full of love and hope. It is a beautiful piece of theatre and the Fulton does a wonderful job with this production.

I had the opportunity to speak with three members of the cast: Katherine Fried (Girl), Ken Allen Neely (Guy) and J. Michael Zygo (Emcee, Dance Captain). Additionally, J. Michael Zygo was an original cast member/musician from the Broadway production of Once. I spoke with these members of the cast about what audience can expect, what they are hoping audiences will take away from the show and what the story means to them.

Kelli Curtin: For people who have yet to see Once, what can they expect?

Katherine Fried: People can expect an immersive world of music. There is a preshow that starts twenty minutes before the show. It starts in the lobby and the actors play music and then lead everyone into the theatre. I really love the ideal of the music being the thing that leads everyone into the world of the story of Once.

Ken Allen Neely: The show is really fun because it is a simple story. It is bold because it is not like your traditional musical theatre experience. There is not a big set or big dance numbers. It is brave in the way the audience just sits down and watches this seemingly simple story. People will sit down and be affected by the impact that this story can have. The show is all inclusive – there is the preshow in which we invite the audience in to experience the story. I am really hoping that the audience feels as if they are a part of the story we are telling.

J. Michael Zygo: Once is designed so that everyone is to feel like they are part of the community and that everyone can share in the experience. All the actors in the show are the musicians – there is no orchestra. There is a sense of community - in the original days of theatre there was a traveling group of actors and they would make the show happen wherever they were. There might not necessarily have been a building to perform in or a stage. For example, if there was a group performing outside one of them would pull up a chair and jump up on the chair, perform their part, and then jump down when they were done or until the next scene. That type of community in theatre is how Once is constructed, so everyone, including the audience, feels closer to the piece.

Ken Allen Neely: What I love about how this show is designed is how we can see people’s faces light up as we lead people into the theatre with music. It is incredible to see people just awe-struck and seeing that joy on people’s faces is rewarding.

Kelli Curtin: What is it like to be in a show in which you play your own instruments? Did you have to learn the instruments for the show?

Katherine Fried: Some people definitely have picked up instruments for this show specifically, and other people are playing their main instrument that they have played for years. I grew up playing piano and that was definitely part of my life before other forms of music and theatre. I feel that everyone’s relationship with their own instrument is really personal, and being able to explore that through the lens of a character has been a really special and meaningful experience.

Kevin Allen Neely: As far as learning an instrument I did not have to do anything new. I have the easiest job, I just have to play guitar, and I have played it for years previously. Other than the emotional journey, this has been pretty stress-free for me. I grew up busking on the streets, which is kind of similar to my character.

J. Michael Zygo: I did not pick up a guitar until I was nineteen. I found the love of the guitar then and I was grateful I had a friend who taught me some chords. That got me hooked and then I started playing. I realized that playing the guitar could be a part of my musical theatre journey.

Once is special,  even though there are other actor/musician shows - and I love every single one of them - because it is expounding on the talents of the existing actors. However, Once is really special because the characters all rationally play these instruments,  the story revolves around the characters’ story about playing these instruments as opposed to actors that just happen to be the band onstage. In Once the instruments become part of each character.

Katherine Fried: The instruments are the extension of the self in Once. I also really love that this show does not feel like a musical, but a play with music. The music is not furthering the plot through song it is integrated within the story.

Kelli Curtin: This question is specifically for J. Michael Zygo.  You have been involved with Once since the beginning. How has the show evolved? 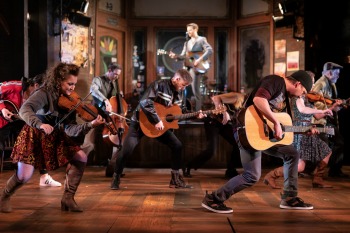 J. Michael Zygo: I was in the original off-Broadway production and then the entire Broadway run. There was an incarnation of Once at American Repertory Theatre in Massachusetts before I got there. I joined when it was fully flushed out at New York Theatre Workshop. I was the only new cast member. I joined a group of eleven other people who had already established this beautiful piece. We put it all together at New York Theatre Workshop and then the exact same production moved to Broadway – it was the same set, same actors, same book, etc. Since then the show has taken on a life of its own. Different theatres around the country will do it and the instrument breakdown of who is playing what may be completely different than the original. That is what is so great about this show is that actors have come in with a very specific skill set and the director will figure out how to make those skills work for the show. There is a lot of availability for variety in this particular show.

Kevin Allen Neely: My favorite thing to see from region to region is the set. The set is wildly different almost every time. I have seen the show set on the streets of Dublin in the round, this production at the Fulton is in a music shop and some I have seen are abstract sets, so the audience does not know where it is taking place. It is fun to see different takes on the show from region to region.

Kelli Curtin: What are you hoping audiences take away from the show?

Kevin Allen Neely: Katherine said this before that we want people to feel affected. Once is not a huge story we are telling, it is not an epic tale. It is a story over the span of five days. It is a story about feeling impacted.

Katherine Fried: We were having a conversation the other day about more presentational methods of storytelling and this particular piece is 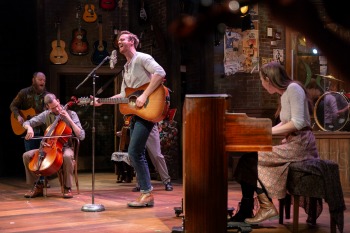 something that is not to be controlled, but it controls the people in it. I think Once is a beautiful exploration of humanity and connection and love, and it is expressed through music. All the emotion could be expressed in many other ways, but there is something so good about this medium of exchange, listening and being present and observing.

J. Michael Zygo: I agree with that idea Katherine just stated about this musical controlling us instead of us trying to control it. In addition, I hope people are lifted up. Everyone in this story does so much to lift up other characters and I hope the audience feels that as well.

Kelli Curtin: What does the overall story of Once mean to you?

J. Michael Zygo: Once has been such a blessing because it has allowed me to financially support my family and feel a little more stable. I am so grateful for this piece of Art that so many people had a hand in creating. This has been the first time I have been back doing the show since New York and I am so grateful to be back in this world of Once.

Kevin Allen Neely: There is this through line in the story about currency and what you can exchange with others. There is so many ways the characters do that in the show and it is written blatantly in the script. One of the first lines we have is “You fix my Hoover and I pay you with music.” Another line that expresses this idea of currency is the bank manager saying, “I can help you Billy with your business.” There is so many ways to exchange and barter written in this script. That is something that sort of clicked in my head and made me look at things differently by asking myself what I can offer others in a selfless way. That has been something I have learned from the show and something I have been exploring. There is just something honest and real about the exchanges in the show. 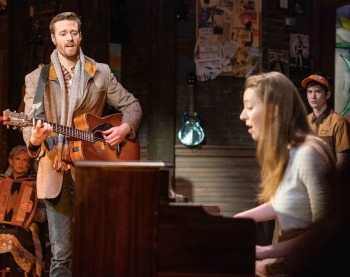 J. Michael Zygo: When you are watching television or a movie and it is something that is bothering you you can hit the pause button or turn it off. Theatre is challenging and it should be challenging. It helps people open their mind and expand their horizons in terms of what people are willing to embrace and affect you in a way you did not realize.

Kevin Allen Neely: There is an immediate pay off to watching live theatre. For centuries people have craved some sort of escape in entertainment and there is something about live theatre that is an immediate response. Whether you are in the house or onstage, being face to face with the audience or with the actors onstage, it is a lot more rewarding than seeing a film. This moment of being face to face will never happen in the same exact way again.

Katherine Fried: Presence, presence, presence. To be sitting in a room full of people that are processing and thinking about what is happening in front of them and they are experiencing this collectively. It is a rarity that people are in a room together paying attention to the same piece of Art and responding to what they are seeing together. It is wonderful to experience this as an actor and as part of the audience.

Katherine Fried: I really hope people come see this show because it is a beautiful show.

Kevin Allen Neely: Nathaniel [Shaw], our director, said that it is so easy to get sentimental about this show, but it is also funny and lighthearted. It is not just a two-hour emotional journey, it is a fun and energetic show. Once is a celebration.

J. Michael Zygo: There is something in this show for everyone.

Once runs at the Fulton Theatre through April 14, 2019. For more information and tickets visit their website at www.thefulton.org or call the box office at 717-397-7425.