Behind the Scenes: A Conversation with Kevin Loreque from Fulton Theatre’s I AM MY OWN WIFE 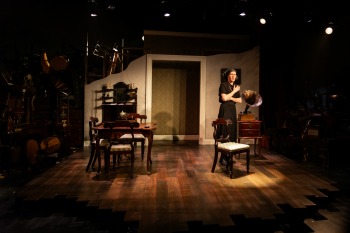 I Am My Own Wife is one of the best pieces of theatre I have seen onstage at the Fulton in the past few years. It is a stunning and beautiful play, and if you have not had a chance to see it I highly recommend getting tickets. It is at the Fulton as part of the Studio Series and it only runs through April 28, 2019. The play is a one man play about Charlotte von Mahlsdorf, a German transvestite who, against all odds, survived the Nazi occupation as a woman. The production at the Fulton stars Kevin Loreque who plays thirty-five different roles in the play. Loreque is exceptional and brilliant in this play. Audiences will definitely be able to see the passion Loreque has for this play and it comes through in his performance.

I had the opportunity to speak to Loreque about I Am My Own Wife. We had a wonderful and informative conversation about the play, the research he did to prepare for the roles and what character he finds the most challenging.

Kelli Curtin: For people who are unfamiliar with I Am My Own Wife, could you talk a little about what the show is about and what audiences can expect?

Kevin Loreque: The show is about a German transvestite, Charlotte von Mahlsdorf, who somehow survived in East Berlin through the Nazis and the Communists wearing a dress. I know that is a short answer, but that is the basics of the plot without giving a lot away.

When people come to see the show I think it takes an audience member time to adjust to seeing one person playing multiple characters. In saying that though I think the audience quickly adapts. People can expect to see a fascinating story. It is just a remarkable life to watch unfold. I am sure there are some people out there who have a hard time getting onboard with some of the things that she did, but I always go back to that you cannot judge what someone else is going through especially in the time period they were going through it. With all things that were happening to her - people cannot say I would never react that way because no one knows how they would personally react unless you are in the throes of it – basically people had to make the decision between do I want to survive or do I want to be killed or thrown in jail? This is a very thoughtful piece that makes people examine their own life. Most people have done something in their own life that they would look back upon and regret. This show may open up a dialogue not only about the show, but also an examination of their own life.

Kelli: What are the ways in which you have prepared for this play and characters beyond studying dialects and committing lines to memory?

Kevin: With playing Charlotte luckily there is a pseudo German documentary about her life titled, Ich bin meine eigene Frau, which translates to I am my woman. It helped me research her cadence and the way she held herself. The film is definitely an homage to who she is. I am not trying to mimic Charlotte in the play I just wanted to see how she walked and her body language to get a feel for who she was.

The first time I played this role in 2006, I remember looking at the script and it terrified me. I thought to myself the only way I can do this piece is if I go over to Germany and do research. The artistic director of the theatre I was getting ready to do this piece at went with me and we went to all the places the play talks about. It was really incredible. So, when I am onstage I am actually picturing the Gründerzeit museum. The first time I did this show the artistic director gave me chestnuts from the grounds of Gründerzeit. I still have them and I hold on to them before the show each night. The pearls I wear in the show I bought in Berlin and I added a magnetic clasp to the necklace so I can easily take them off during the show. I feel like I have pieces of Berlin with me. When we went to the Gründerzeit museum we spent the whole day there and it was not with a group. Luckily, we were able to go into the museum and walk around. We spent hours in there. In the play when I talk about the basement where the clocks were I know exactly what that looks like. Also, I can picture where the window was that the neo-Nazis smashed. I also was in the Mulackritze bar and the staircase is very steep going into it. I just have these images from the time I was in Berlin and at the Gründerzeit while I am performing the play. That research definitely helped the preparation for the show, it helped me envision the environment.

Also in Berlin there are two Holocaust exhibits. The exhibits make you feel uneasy as you walk through them. One involves different ramps and a slight slope. There are different size blocks that are wave-like and pieces of art. As you walk through the exhibit it feels different wherever you stand because of the uneven concrete floor. It feels uncertain and disorienting. I also think of this exhibit each night before the show.

Kelli: You’re playing 35 different people. Who is the most challenging to play? Which character do you find most gratifying? 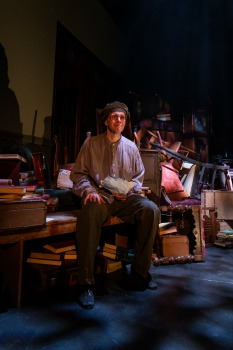 Kevin: First, I would say Alfred. I had a really hard time getting under his skin because he is a person who has been betrayed in one way and I do not know if he necessarily saw himself in that way. In the opening of act two there is such a bitterness to him, but a humor as well. It is this interesting dichotomy. He was my most challenging originally and now that I understand him I love playing him. He is so unabashed and unapologetic. I think that is the reason I had such a hard time because I am not that way in my own life. Personally, I had been betrayed by a friend and I think there was a part of me that was blocking that betrayal out and once I tapped into that feeling I was able to find Alfred for myself.

One of the people I play is inspired by one of the best human beings that I have ever come across in my career. He was one of my acting teachers in Los Angeles at the Beverly Hills Playhouse. This may sound a little strange, but when Charlotte is up against the wall facing the four SS officers and then the commander comes, I picture my teacher, Allen Williams, because I can picture him playing a Nazi on stage, but he has one of the kindest souls that I have come across. That moment for me is just a wonderful moment to play because I think of him and his kindness. The Commander was Charlotte’s savior. In a way, when I was young, I was 18 or 19 when I met Allen in class, and he somehow gave me the encouragement and confidence that I was doing what I should be doing. I remember him saying, “Everything you do is truthful.”

Kelli: Without giving anything away, what’s your favorite part of the show? Why?

Kevin: There are so many, and it is really hard to pick one part of the show that is my favorite. What is so interesting is the creative team on this production is amazing. I feel there was such a beautiful blend of ideas and at points I feel like I am in a film score. The moment I go into the basement into the Mulackritze, this is one of my favorite parts. This part has always been one of my favorite moments of the play and it is with the table and Charlotte describing how she wants to take an old phonograph needle and run it along a surface of wood. This scene with the music and lighting and everything together really is just a special moment.

When I did the invited performance before the show opened I was nervous and not quite in the show at first. It was really jarring and I was dropping lines. However, when I hit the basement scene everything just sank in. Now, every night when I get to the scene when I enter the basement, it is just bliss knowing I get to do this play and that particular scene. It just speaks to me.

Kelli: What are you hoping audiences take away from this show?

Kevin: I am hoping they do not judge and that they find compassion for Charlotte and also for themselves to come to a place where they can 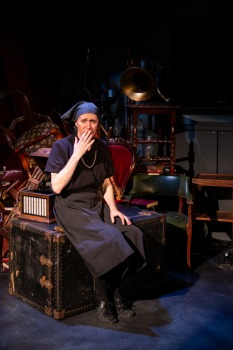 forgive themselves for things they might have done and regret those decisions.

Kevin: It is the immediacy of it. There is nothing like the energetic exchange between people especially through a performance. Personally, I go a lot off of energy. I have had people come up to me and say they have seen this play a few times previously and it did not really speak to them. They continue to say that for whatever reason that this particular production does effect and speak to them. I think it is because I love this piece so much and I think that energy goes across the footlights into the audience, so they feel what I am going through on stage. For this piece and for any piece of live theatre that is what it is about – the energy exchange between the performers and the audience.

Kevin Loreque can be seen in I Am My Own Wife at the Fulton Theatre through April 28, 2019. For more information and tickets please visit www.thefulton.org or call the box office at 717-397-7425.

Thanks so much for this glimpse into the show!

We hope to get to see it!

Keep up the great work!