Behind the Scenes: A Conversation with J. Harrison Ghee from THE STING at Paper Mill Playhouse

The world premiere of The Sting opens at Paper Mill Playhouse in Millburn, New Jersey on April 8, 2018. This new musical is based on the 1973 Academy Award winning film of the same name which starred Robert Redford and Paul Newman. This new musical has an all-star cast including:  J. Harrison Ghee as Johnny Hooker and Harry Connick, Jr. as Henry Gondorff. As well as Kate Shindle, Janet Dacal, Peter Benson and Tom Hewitt.

We had the opportunity to speak with J. Harrison Ghee who plays Johnny Hooker. For those unfamiliar with Ghee’s work he is best known for playing Lola in Kinky Boots both on the tour and on Broadway. We spoke with him about his role in The Sting, what it is like creating a role for a brand new musical, and what he is most excited for audiences to see in the world-premiere production.

Kelli Curtin: For our readers who are unfamiliar with the story of The Sting how would you describe the show?

J. Harrison Ghee: The Sting is about Illinois street grifters in the 1930s. The show tells the story of Johnny Hooker, who I play. Johnny’s mentor gets killed and he wants vengeance for his murder and that is how I find Henry Gondorff, played by Harry Connick Jr. Henry and Johnny pull off this long con and we come out a little richer and wiser from what we learn trying to bring down Chicago’s most corrupt swindler.

Kelli Curtin: Could you tell me a little about your character, Johnny Hooker?

J. Harrison Ghee: Johnny is a hot headed, fast footed, and quick handed small town grifter. He is a little lost and needs some guidance and he 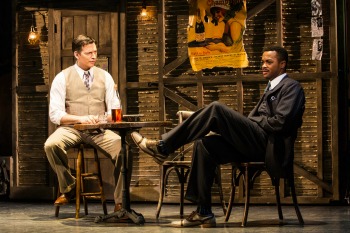 receives that guidance from not only Henry Gondorff, but also Loretta (Janet Dacal) who is someone Johnny meets along the way. Throughout the show he learns things about himself. Also, this is such an active role, I am moving all the time when I am onstage.

Kelli Curtin: What is it like creating a role in The Sting, which is a world premiere production?

J. Harrison Ghee: It has been such a fun learning experience for me. The team for this show have been wonderful – working with people such as Bob Martin who wrote the book, director John Rando and choreographer Warren Carlyle has been a wonderful experience. The team has created a safe creative space in order to be able to workshop ideas and be able to find out who Johnny Hooker is. In the creative process I let the words inform Johnny’s actions and music inform his movement.

Kelli Curtin: What are you most excited for audiences to see? 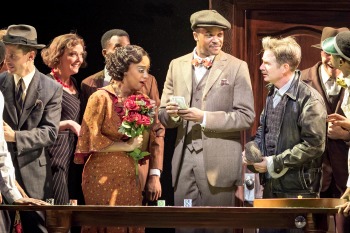 J. Harrison Ghee: I cannot wait for people to see how much action is packed into this theatre venture. Through the process I have learned there are so many layers to pulling off a show where being a con is part of my character. There are so many parts to this show and all the moving parts have to work together for this show to be a success. I am really excited for audiences to see all these layers of the musical come together to be an incredible show.

Kelli Curtin: Is there anything you look forward to the most before you step out onstage each night?

J. Harrison Ghee: I love hearing the responses from the audience. When we are working in a rehearsal space we only have each other responding, so it has been great hearing an audience respond to the show. Also, every audience is different, so they all respond to different parts of the show. When we hear the audience respond it helps us become more energized and make it a better show. I love the knowledge that what we intended to so onstage is coming across clear to the audience and that they respond to it.

Kelli Curtin: Could you tell me a little about how you got started in theatre?

J. Harrison Ghee: I think I knew I always wanted to be a performer. I grew up singing in church in North Carolina. Also, I had this VHS tape of 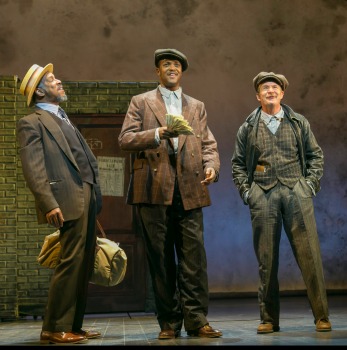 Porgy and Bess and I was so intrigued by the music and story. Watching that show was inspirational to me and it took me to a different place. I always knew I loved entertaining people, so at the age of eighteen I moved to New York City.

Kelli Curtin: What has been the most rewarding experience onstage for you?

J. Harrison Ghee: I have been blessed with so many opportunities. For me, Kinky Boots has been life changing. Personally, there has been nothing like performing as Lola in North Carolina and being able to share this with people who know me the best. It was such a wonderful experience having audiences there filled with family and friends and hear them react to me onstage as Lola. I was content playing Lola in the touring company, and honestly, I never thought I would play the role on Broadway. I received the news that I would be playing Lola on Broadway from Jerry Mitchell [Director and Choreographer of Kinky Boots] and it was the first time in my life I was actually speechless.

Kelli Curtin: Do you have any advice for aspiring performers?

J. Harrison Ghee: Anytime I am asked this question I like to tell people to keep friends who do not allow you to be disillusioned and who are honest with you. It is good to have friends who are honest with you and who have your best interest at heart. These are the people you need in your life who do not mind telling you the truth and remind you to be realistic. Everyone needs someone in their life that helps keep you grounded. 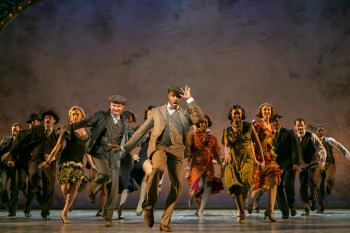 J. Harrison Ghee: Live theatre is an art form where art imitates life. It is a way in which we can look into a mirror and theatre teaches us about life and shows us the truth. In addition, live theatre serves as a form of escapism, but it also shines a spotlight on issues we need to address as a society. It is a way in which we can learn. What I have personally learned from being part of the theatre community is that we come together to make a difference in society through our Art.

J. Harrison Ghee can be seen playing Johnny Hooker in Paper Mill Playhouse’s production of The Sting which runs through April 29, 2018. For more information and tickets visit their website at papermill.org or call the box office at (973)376-4343.