Behind the Scenes: A Conversation with David Girolmo about Fulton Theatre’s GUYS AND DOLLS

Guys and Dolls is currently on stage at the Fulton Theatre. The musical has been described by some as one of the best musical in the last one-hundred years. This musical tells the story of gamblers, gangsters and other characters living in New York City in the 1920s and 30s. The show is full of well-known music written by Frank Loesser such as “Luck Be a Lady” and “A Bushel and a Peck.”

I had a chance to sit down and speak with David Girolmo who plays Arvide Abernathy. Girolmo is no stranger to the Fulton’s stage as he has been in several productions there including Sunset Boulevard, Singin’ in the Rain and The Addams Family. In addition, Mr. Girolmo has most recently appeared on Broadway in War Paint which starred Patti LuPone and Christine Ebersole. It was a pleasure speaking with Mr. Girolmo about the production of Guys and Dolls at the Fulton. He spoke about his character, Arvide, why he enjoys coming to work at the Fulton and his experience in War Paint.

Kelli Curtin: For people unfamiliar with Guys and Dolls could you tell me a little about the show?

David Girolmo: Guys and Dolls is a musical about love triumphing over everything. In the show you have two different couples who get together against all odds and triumph in the face of some pretty serious conflicts. One couple, Sarah Brown and Sky Masterson, get together in spite of the fact they are diametrically opposite in terms of how they lead their lives. The other couple Nathan Detroit and Miss Adelaide get together even though their lives are so similar and they still cannot find a way to be married. Guys and Dolls is a show really about love – how people find a way to each other in spite of obstacles.

The show is reminiscent of other Frank Loesser musicals. He wrote so many stories similar to Guys and Dolls. Many of his musicals have this story about opposites attracting as a principal themes. Look at The Most Happy Fella. In this show you have people from two very different worlds and the character Tony is much older than Rosabella. However, despite all the odds, they end up together because as Lin Manuel-Miranda famously said, love is love is love is love.

In addition, Guys and Dolls has one of the greatest scores of all time written by Frank Loesser. The show has rich characters drawn with broad strokes and they will be performed by people who are just geniuses, have glorious voices and are great character actors. This entire cast creates something whole and real out of these broad stroke characters that were originally created by Damon Runyon who wrote the short stories the musical is based on and also Abe Burrows who wrote the book for the musical Guys and Dolls.

Kelli: Why should audiences come and see this show at the Fulton? What can they expect?

David: You may think you have seen Guys and Dolls before, but you have not seen it until you have seen it at the Fulton. Nobody does it better than Marc Robin, and no theatre does it better than the Fulton Theatre. One of the reasons I keep coming back to work at the Fulton is because this company is so committed to doing a show right. They are committed to finding the heart of a piece by paying homage to what an audience member expects, and yet they still deliver the unexpected. This theatre just does it better than everyone else, and it is a fantastic place to work. I would recommend people come see Guys and Dolls at the Fulton because they have never seen Guys and Dolls like this version at the Fulton Theatre. In addition, here in Lancaster, Pennsylvania this show has gathered enormously talented people.  Beginning with Marc [Robin,] who is one the most talented people I have ever met, to the people in the show. Our musical director, John Daniels, is incredible, the people who are in this play from Kevin Earley who plays Sky Masterson to Fran Prisco who is playing Nathan Detroit and right on down the line. These are fantastic performers and people should come out and see them in this show.

Kelli: Could you tell me a little about your character, Arvide Abernathy?

David: He is a person who is taking care of his granddaughter. However, there is not a lot of information about him in the play, so I have created a backstory on him based on the short stories I read that Guys and Dolls is based on. He is Sarah Brown’s grandfather and through reading the short story, The Idyll of Miss Sarah Brown, I found out that Sarah’s father and brother were lost to gambling, which explains why she became a missionary who is adamantly opposed to gambling. I suspect that Arvide was not part of their lives, I do not know if it was because he was a marine, but for whatever reason he was not part of his children’s lives. When Arvide discovers that the granddaughter is on her own he comes and takes care of her. I feel that Arvide is a fairly gentle soul, but you cannot be too gentle living in Times Square and dealing with the drunks and gamblers of Time Square. Arvide definitely has some backbone.

Kelli: Over the years I have been following your career. I originally saw you at the Fulton in Sunset Boulevard, and most recently on Broadway in War Paint. Could you share with me a little about that experience?

David: I loved doing Sunset Boulevard at the Fulton Theatre. I know it may be odd, but I think that is my favorite of Andrew Lloyd Webber’s shows, although I do love Evita. Also, I loved doing War Paint with Patti [LuPone], Christine [Ebersol] and director, Michael Greif, it was just such a great experience. However, being in New York is difficult because I have a beautiful home and a lovely wife in Illinois and I like being there. I lived in New York right after college for ten years, but then I got a show in Chicago and fell in love with the city. In general, the experience of War Paint was fantastic. I mean how bad can it be when you see Patti LuPone every day you go to work. Plus, we became pals through the show, which is great. She is just an amazing person, and she is such a great actor. Patti is known for having that giant voice, that clarion sound, which is second only to Ethel Merman in the history of Broadway. However, a lot of people fail to give her the credit she is due for being one of America’s greatest actors.

Kelli: You have a successful career, and you have played many different roles over the years. Is there anyone or anything you attribute with your success? 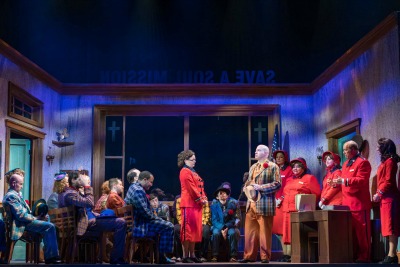 David: Well, me, I have worked really hard. Yet, I have also been extremely lucky. I have met so many incredible people who have helped me create a career. Marc Robin has helped me shape an entire career with dozens of jobs, introductions to other people and having faith in me by giving me parts I maybe would not have gotten from someone else. I really have been lucky. I have done a couple of Broadway shows with incredible people such as Hal Prince who directed Candide and Michel Greif directing War Paint. They gave me faith because if they like you then you must be doing something right. All this being said, I have never wanted to be anything besides an actor. I put all my eggs in this basket a long time ago and I have been incredibly fortunate to work steadily.

David: There is a good reason why theatre has been around since the dawn of time. It is important because the theatre itself is a reflection of the life around you, and the world around you. Live theatre is as vital as education, as music; live theatre is vital for us as a society. It is curious to me why anyone would think it is not important because live theatre is so unique. You cannot have this experience of audience and performer anyplace else. It is why we want to see someone live. Theatre is immediate and the same experience never happens again. The theatre experience with the group dynamic only happens once. Theatre is life changing and life affirming. Even though you are in a house full of people and it is a collective experience it is still a one on one experience. That is all you need for the theatre – one actor and one audience member and that is what makes it different than everything else.

David Girolmo is currently at the Fulton theatre playing Arvide Abernathy in Guys and Dolls. The show runs through March 31, 2018. For more information and tickets visit their website at www.thefulton.org or call the box office at 717-397-7425.

Photos Courtesy of the Fulton Theatre