Behind the Scenes: A Conversation with E. Fay Butler, Felicia P. Fields and Jim Hogan from SOPHISTICATED LADIES at Fulton Theatre 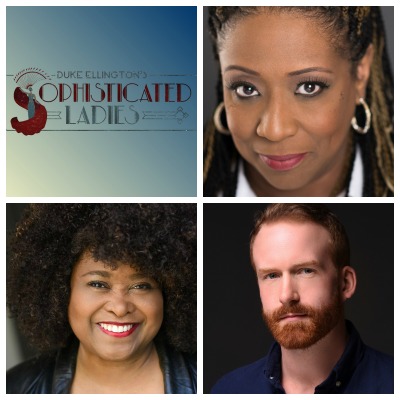 Currently onstage at the Fulton Theatre is a glamorous production of Sophisticated Ladies. This show celebrates the timeless music of Duke Ellington and the jazz era. This show is packed with dazzling costumes, huge dance numbers and an exquisite orchestra on the stage.

I had a chance to speak with three members from the cast of Sophisticated Ladies: E. Faye Butler, Felicia P. Fields and Jim Hogan. They talked about the genius of Duke Ellington’s music, why audiences should come to the Fulton Theatre and see this show and their favorite part of the production.

Kelli Curtin: For those unfamiliar with Sophisticated Ladies could you tell me a little about the show?

E. Faye Butler: This is a show that celebrates the life and the music of Duke Ellington, who in many ways is one of the forgotten composers. He is like the Stephen Sondheim of his era. At the time they thought Ellington’s music was unusual – the timing was strange, the instrumentation was strange, the lyrics were weird, the rhythms kind of went everywhere. This is the best way I can describe the music of Ellington to the people who do not know a lot about him and describe him in a theatrical way. People have described Sondheim in a similar manner. You think his music is going to go one way and then it goes a completely different way. Ellington’s music took jazz and gave it a spin.

Felicia P. Fields: When Ellington first came on the musical scene jazz had not been completely recognized yet especially by African Americans. Blues and gospel they were up on, but jazz had not come into full understanding yet.

E. Faye: Although Ellington’s music sounds great to the ear, as an artist to sing it the music is nothing like you think it is. Vocally his music is challenging, and we cannot second guess the music. We just have to go with what was written because all the components of the music complement each other.

Felicia: Jazz is complex. I always think of jazz like a bunch of numbers going around. The music of jazz makes its own puzzle. That is the genius of Duke Ellington and why he needs to be celebrated because it is unlike anything else.

Jim: When I was doing research about Ellington for Sophisticated Ladies I was surprised to learn all the songs he wrote that I was familiar with like “Take the A Train.” I did not know Ellington wrote them. For example, Ellington’s music appears in other musicals like “Take the A Train” is in the song “In the Heights” from In the Heights.  The period of research I did for this show was just fun and I had the opportunity to become familiar with Ellington and realize the large amount of music he wrote.

Kelli: Why should audiences come to the Fulton to see Sophisticated Ladies? What can audiences expect?

Jim: It is unlike anything else you will see. It is spectacular and unique, and a celebration of music. Also, there is something for everyone in this 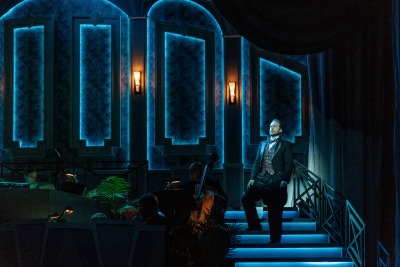 show. From children to seniors, everyone will find something in this show they are familiar with. People will see an amazing dance, a dramatic moment, a comedic moment and all of this lends itself to incredible entertainment.

E. Faye: Also, this is a show in which the audience does not have to think. Audiences just have to sit back, relax and enjoy the show. The show is not political. It is just good solid entertainment and music. One man said to me that it is so nice to go to the theatre and hear songs that make sense to me and lyrics I understand and people just stand still and sing. There are moments in this show where there is nothing happening and someone is just standing in the center of the stage and just singing. The simplicity of this is something we don’t see that often anymore without pyrotechnics and flames. I love that this show is just celebrating the music in that audiences can sit back and enjoy. Plus there is an orchestra onstage.

Felicia: It is so good to see the faces of the audience. They smile and enjoy the show, and we can see that from the stage.

Kelli: In what ways do you as soloists help move the story forward beyond the dancing?

E. Faye: Back in the time of Duke Ellington and during the era of the Cotton Club there were singers that were always a part of the band. One of them was a chanteuse and there was also a romantic female lead singer. There were different titles for the singers that were not just considered a soloist. The chanteuse was usually the singer that was extremely glamorous and had the exquisite gowns. Lena Horne would be considered the chanteuse. Someone like Ethel Waters would be considered the torch singer. There would also be the handsome man that would come out and be like the band leader. In the time of Ellington there would be these different people that they would stick in between the dancing numbers that could support the music and let the dancers take a break, change costumes and get ready for the next big number. This was the thread they used in the era of the Cotton Club. The singers are there, but they all have different styles of singing to bring different energy leading up to the big number that is coming. 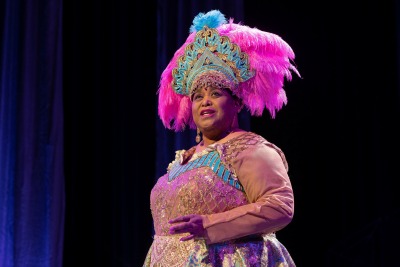 Felicia: There are sections of the show that have a story like the “Harlem” section that they weave in between a lot of the swing dancing and tap numbers. All the music is threaded together to give you some type of story. A portion of the show “Harlem Suite” is from an era of music and it is threaded together in such a way in the show to represent how they talked about the brothel and show how back then there were the Madams that would get money from the gentleman and go in a quiet private place and do their thing in the dark. Then at the end of the show there are the standards, which flows into elegance.

Kelli: How does this show translate to audiences in 2019?

E. Faye: Sophisticated Ladies does not date because Ellington’s music is timeless.

Felicia: Good music will always resonate with audiences. It surpasses time. It really is timeless. This is a show in which you have to do honor to the piece and this production does that. This production honors Ellington’s music especially the genius of him. Shows like this are not done too much anymore and it is just beautiful to watch.

E. Faye: Also, I want to mention that it has been two years since I have been at the Fulton and they have made remarkable changes to the theatre. If people have not been to the Fulton recently this is a great show to reintroduce themselves to the theatre. Things like the sound system have changed and this gives the audience a whole new perspective of the stage. Plus the new additions bring this old story of Sophisticated Ladies to life.

Kelli: What is your favorite number in the show?

E. Faye: I really like “Something to Live For” and “Rockin’ Rhythm.”

Jim: I think mine is their duet at the end, “I Got It Bad and That Ain’t Good/Mood Indigo.” I have another introduction after their number, so I can stand and take in the beauty of the number. The way they combine the two songs together it has a really great arc to it.

Felicia: I like “I Got it Bad and That Ain’t Good” because you can actually identify with it. A person who has been through a romance of any kind will understand this song. It is not a song that you lie about. At this particular point in the show everyone is thinking of that one relationship that they question in their mind.

Jim: This feels like the eleven o’clock number to me, whether that was the intention of the directors I am not sure. We go right into the “Sophisticated Ladies” section from that song. The song is a raw, powerful and emotional way to transition to the next section.

Felicia: I also like “Sophisticated Lady.” It is an incredible number even though it is different musically. And, I like “Something to Live For.” I would say that one is my favorite number. It definitely is a reality song that we all can relate to.

Jim: I don’t understand why people wouldn’t think live theatre is important. I would never take anything away from the television or film art form. However, the reason I love doing live theatre and the reason I love watching it is because it is live. Anything can happen at any given time. There is something visceral about live theatre to me and it is truly unique and American if we are talking about the Musical Theatre art form.

E. Faye: Theatre allows me to share and commune with people. I really think it is an important thing for us to continue to learn about other people, 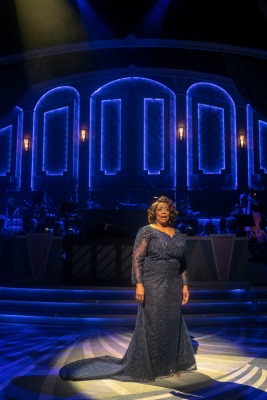 cultures, things that are going on in the world and music. The only way to learn about these things is to come out of your house. We make so many assumptions about people and about cultures. I feel theatre is educational and we learn about people by watching a show.

Live theatre can also bond family and friends. The reason I am part of the theatre community is because every Saturday or Sunday my mother took me to something – an art gallery, film, museum - one of the things that clicked with me is when she took me to the theatre. She took us as a family to the theatre and made it a family event. For that reason I am part of the theatre because there is nothing like sitting there watching people live dancing around, singing and doing a play. That exposed me to a whole world of things.

Felicia: There are so many kids that are in school that are not born to be mathematicians or scientists and have this ability to use their artistry for things like theatre or art or music and give people joy. In a time where money is being taken away from the Arts I feel this is the time to expose young people to live theatre. It lets kids express what they need to express and fulfill what they were born to do. In live theatre there is no cushion and it takes intelligence, physicality and art to be onstage and involved in a live production.

Sophisticated Ladies runs at the Fulton Theatre through May 25, 2019. For more information and tickets please visit www.thefulton.org or call the box office at 717-397-7425.