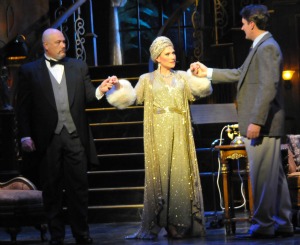 As the year 2012 comes to a close, I thought it would be a good time to celebrate the rich theatre in Lancaster. I have had the privilege over the past few months to share my thoughts on the shows at the Fulton Theatre and PRiMA, and the exceptional art that they provide to Lancaster. Reminiscing about the shows I have attended over the last year, there is one show that stands out and always captivates my imagination. That show is the Fulton Theatre’s Sunset Boulevard.

The show ran from March 14 through April 1, 2012. This version of Sunset Boulevard was haunting and stunning at the same time. The production not only had exceptional performers, but also had remarkable sets and costumes. Marc Robin, the artistic director at the Fulton, deserves a standing ovation for the Fulton’s production of Sunset Boulevard. His vision of this story made the story so much more relatable than the movie. In today’s culture where celebrity culture is so much a part of everyday life, audiences could empathize with Norma.

Denise Whelan portrayed Norma Desmond with greatness. Not only did she make the audience understand Norma’s desperation, but Whelan also successfully depicted Norma as a larger than life character.  The audience could feel Norma’s desperation to hold on to her stardom, and to feel like she was still relevant to the movie studio and to her fans. Whelan’s rendition of “With One Look” is full of passion. With this one song, Whelan portrays Norma’s stardom. The lyrics, as well as Whelan’s brilliant portrayal of Norma, helps the audience understand how important Norma was to the silent film industry. As the lyrics state, “No words can tell the stories my eyes tell, Watch me when I frown, you can't write that down.” This reviewer could not imagine anyone else playing Norma – Whelan shined in this role.

In preparing for the role, Whelan explains that it was important to play Norma for the truth and not as an unrealistic character. Whelan illustrates, “in this business [the entertainment industry] youth and beauty (mostly for women) is valued much more than goodness of soul or talent.” Norma was valued by her adoring fans for her beauty and youth, and as she got older she was forgotten. 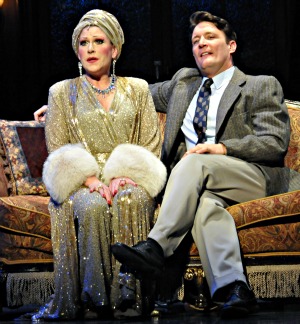 Curt Dale Clark provided an exceptional performance as Joe Gillis. From his first entrance when he informs the audience that the story involves a homicide on Sunset Boulevard to the end, Clark’s portrayal of Gillis is phenomenal. Gillis is a struggling writer and desperate to write a successful script. The audience feels Gillis’s desperation to be successful as well as feels his passion especially in regards to his love for Betty. Clark’s performance of the song “Sunset Boulevard” was chilling, and one of the best vocals of the show.

Clark describes Joe Gillis as a lost soul who is talented but Gillis doubts himself. In addition, Clark explains that Joe is not conniving, but he falls victim to the manipulation of Norma. There is a line in the song “Sunset Boulevard” where Joe says, “And if I’m being honest, I like the lady.” Therefore, despite being manipulated by Norma, Joe does have a certain respect for Norma. I asked Curt Dale Clark if it is difficult to perform in a show that is mostly sung. He responded by telling me that he loves performing in a show like Sunset Boulevard where the majority of the show is sung. He also explained the difficulty of performing in a show like this because if a line is missed it is difficult to recover from. In speaking with Whelan and Clark recently, I came to understand how much work and effort is put into a show like this. Talking to these two actors really brought to light the talent and dedication of all involved with this production of Sunset Boulevard.

Another individual who needs recognized for his role in this show is David Girolmo. Girolmo’s depiction of Max is one that offers complexity. He is a mysterious servant who has a secret, but Girolmo’s portrayal of Max is memorable. His show-stopping vocal of “The Greatest Star of All” is one that I will surely remember. The emotion that Girolmo elicited, especially at the end of the show, reminded audiences that Max truly loved Norma for who she was and not her fame. Girolmo’s performance was exceptional in Sunset Boulevard.

Lastly, I would like to mention the detail that went into the sets and costumes for this production. The detail that went into the set for Norma’s mansion was extraordinary. From the tiles on the floor to the grand staircase to the organ – there was not a detail missed in the construction of the set. In addition, there were about fifty portraits of Norma on the stage to complete the accurate detail of this screen star’s house. The images were realistic and period correct, the attention to detail that the crew gave to the construction of the set needs to be applauded. In addition, the costumes were magnificent. The detail in the costumes also needs to be commended. Denise Whelan confirmed that some of her costumes were around fifty pounds. The hard work that went into all this detail to make the show period correct really needs to be recognized.

To conclude, the Fulton’s production of Sunset Boulevard is one of the best shows that I have seen not just in Lancaster County but anywhere. The performers were Broadway quality, and the set and costumes were stunning. Everyone involved in this production deserves recognition for all their hard work. The Fulton produced exceptional shows in 2012, I cannot wait to see what they have in store for their audiences in 2013.