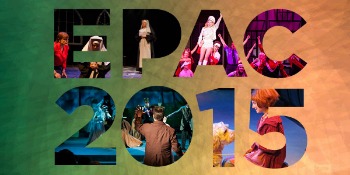 Ephrata Performing Arts Center recently announced their 2015 season. This season is sure to entertain and engage audiences with these upcoming shows. What I love about this season is not only are there shows that delight audiences, but there are also titles that will have audiences contemplating and thinking about what they just witnessed on EPAC’s stage. When I spoke with the Artistic Director of EPAC, Ed Fernandez, he talked to me about the ambitious 2015 season. According to Fernandez, “This season will touch audiences’ funny bones and hearts. The shows in this season are about the individual and the outsider who is trying to fit in, but the shows approach this in a heartwarming way.” Fernandez also said that the focus in the 2015 season is comedy and all the musicals and plays fit together to create a season that is touching and appealing.

First up in EPAC’s season is August: Osage County. This Tracy Letts play, which won the Pulitzer Prize in 2008, tells the story of the Weston family. When the patriarch of the family disappears, members of the Weston family gather together in rural Oklahoma. This audacious play brings a healthy serving of humor, and is poignant as it explores familial relationships through the interactions of the Weston family and the way this family’s dysfunction and underlying love paint a hilarious caricature of family life in suburban America. This show runs March 19 – April 4, 2015.

The first musical of the season is Monty Python’s Spamalot and will be on EPAC’s stage from April 30 through May 16, 2015 . This musical is a stage adaptation of the 1975 film Monty Python and the Holy Grail. The show is a parody of the Arthurian Legend. Spamalot features the Knights Who Say Ni, killer rabbits, accused witches and pays homage to many other Python classic characters and skits.

The next play in the series, The Odd Couple, will be on EPAC’s stage from June 11 – 27, 2015. This time-honored Neil Simon comedy is about the neurotic newswriter, Felix Ungar, and the slovenly Oscar Madison who is a sportswriter.  Oscar and Felix become roommates and test each other’s patience and friendship. This show is sure to tickle the audiences’ funny bone.

The next musical in the series, just in time for the summer, is La Cage Aux Folles. This show runs from July 23 – August 8, 2015. La Cage aux Folles centers on nightclub owner, Georges, and his long time partner, Albin. These two must conceal their lifestyle and their ownership of the drag club downstairs when their son brings home his fiancée and her conservative parents for dinner. This show has a book by Harvey Fierstein and music by Jerry Herman. According to a press release by EPAC, “With [La Cage aux Folles’s] message of inclusion and acceptance, this show is more relevant today than ever, making this big summer musical comedy a great example of theater that matters.”

The next play to grace EPAC’s stage is The Elephant Man, which runs from September 3 – 19, 2015. This play tells the story of John Merrick who was horribly disfigured by a rare disease. The play takes place in Victorian London and depicts Merrick’s struggles from exploited freak show to a life in which he is introduced to London society.

The musical for the fall is Carrie: The Musical. This show is based on the 1974 Stephen King novel of the same name. The musical tells the story of a teen with telekinetic powers that has a lonely life, which is dominated by her religiously oppressive mother. At her high school prom, Carrie is humiliated by her classmates and wreaks havoc on everything and everyone in her path. Carrie: The Musical runs October 15 – 31, 2015.

Closing the 2015 season at EPAC is Shrek: The Musical. Just in time for the holidays, the story of Shrek will warm the hearts of audiences as this fractured fairy-tale tells the story of friendship, love and how our differences can make us stronger. Shrek: The Musical tells the story of the green ogre, Shrek, whose swamp is overflowing with fairy-tale characters that were kicked out of Lord Farquaad’s kingdom. In order for Shrek to get his swamp back he must recue Princess Fiona from a dragon-guarded tower, so Lord Farquaad may marry her, and become king. Along the way, Shrek meets Donkey, a lively and fun loving character, and these two form a friendship. This family friendly musical will delight audiences of all ages. Shrek: The Musical runs December 3 – 19, 2015.

The 2015 season at EPAC is a season that has a show for everyone. The shows this season cover a broad range of diverse themes and topics that will provide audiences laughter, contemplation and enlightenment. In looking at this wonderfully entertaining season ahead in 2015, it is a reminder why EPAC is “theatre that matters.”

EPAC offers several subscription packages. For more information please visit their website at www.ephrataperformingartscenter.com or call their box office at 717-733-7966.