Come Smile with the Fulton Theatre for the 2014-15 season 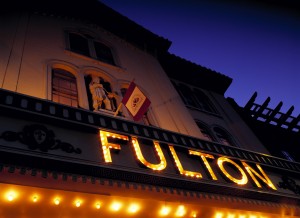 The Fulton Theatre recently had a reception where they announced their 2014-15 season. As Marc Robin explained, he describes this season as “come smile with the Fulton.” Robin stated at this event, “Art has the ability to change the human condition. . . . This new Main Stage season has big titles, casts and laughs.” I could not agree with Robin more, the 2014-15 season has a wonderful variety of titles, and the shows will definitely make audiences smile.

The first play to kick off the season is the farce Lend Me a Tenor, which will run October 7-26, 2014. This play tells the story of Max, who dreams of being a professional opera singer. Max is also the assistant to the General Manager of the Cleveland Grand Opera House. Max is responsible for picking up Tito Merelli, the most renowned opera tenor, but Tito is missing. Once Tito appears, everything begins to unravel and chaos ensues.  All this leads to lots of slamming doors, women in closets, mistaken identities and general misunderstandings. LEND ME A TENOR provides a night full of hilarity and merriment.

The next play in the series is And Then There Were None, which will be on the Fulton stage from January 27 through February 15, 2015. This play is based on a mystery novel written by Agatha Christie. The show tells the story of ten strangers who were invited to an island under different pretenses. Once these strangers reach the island they realize that they are the only people on the island and are trapped. The mystery develops throughout the show and is sure to please anyone who loves a good Agatha Christie story.

The first musical to hit the stage at the Fulton just in time for the holidays is Irving Berlin’s holiday classic, White Christmas that runs from November 18, 2014 through January 4, 2015. This musical is based on the 1954 Paramount Picture of the same name and will be the perfect show for the holiday season. This musical is about two World War II veterans who team up to become a top song and dance act. These two gentlemen follow a duo of beautiful singing sister to their Christmas show at an inn in Vermont. The show is full of dancing, romance and laughter as well as some of the greatest songs written by Irving Berlin such as “White Christmas” and “Blue Skies.” This wonderful musical will definitely put audiences in the holiday spirit.

The next musical to grace the Fulton’s stage is the hilarious Mel Brooks musical, The Producers, which runs from March 10-April 4, 2015. I am thrilled that the Fulton decided to bring this show to their stage. This musical is based on the 1968 film of the same name. The Producers tells the story of Max Bialystock and Leo Bloom, theatre producers who scheme to get rich by raising more money than they could possibly need for a show that is sure to be a Broadway flop. This show is a riot and will have audiences laughing from the beginning of the show until the curtain call. The show is fierce, shameful, and all together blissful. It is a show that will have the entire audience laughing out loud.

The next musical on the schedule is The Full Monty which is based on the 1997 Oscar winning film of the same name. This production runs from April 21-May 17, 2015. This musical tells the story of six steelworkers who are down on their luck and decide to perform a strip act at a local club after seeing the enthusiasm women have for male strippers. These men are searching for a way to escape their unemployment and find a new sense of confidence through this exotic dancing. According to a press release from the Fulton Theatre, “This show is about ‘us.’ Real people in real situations facing real issues forced to decide on the best solutions for them.” This show has a brilliantly written script and a wonderful score. The Full Monty is sure to touch the heart of audience members.

Closing the 2014-15 season is the renowned classic The Wizard of Oz which runs from June 2-28, 2015. Take a journey down the yellow brick road with Dorothy, the Cowardly Lion, the Tin Man, the Scarecrow and of course Toto. See this classic 1939 movie come to life on the Fulton’s stage and hear beloved songs from The Wizard of Oz such as “Somewhere Over the Rainbow,” “We’re Off to See the Wizard,” and “In the Merry Old Land of Oz.” Marc Robin promises that this show will be complete with a huge set, spectacular special effects, and puppetry. This show is a must see show for the entire family.

Robin also made an additional announcement about the Ellen Arnold Groff Studio Series for the 2014-15 season, which is they will be doing a fully staged production for three weeks. This show will be Venus in Fur that will run February 17-March 8, 2015. This show is a two-person play about an actress who arrives hours late to her audition for a play based on the classic erotic nineteenth century novel Venus in Furs. The director is less than impressed by the actress’s audition, and the sessions turns into a tango between actor and director. Venus in Fur has been hailed as “seriously smart and funny” by the New York Times. This comedy is sure to charm audiences and have people laughing throughout the show.

Here is the breakdown for the 2014-15 season for the Fulton Theatre:

Ellen Arnold Groff Studio Series:
Venus in Fur - February 17 - March 8, 2015
The rest of the titles for this series will be announced at a later date.

For more information or to subscribe to the 2014-15 season at the Fulton Theatre, please visit their website at www.thefulton.org or call their box office at 717-397-7425.